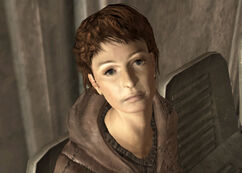 “Talk to Rick if you have something you'd like to say.”

Together with Rick and Dennis, she is being held in a cell within the Fiend infested vault.

I Love Bananas: Rachael and her friends are in a bind. To release them from the cell a Hard lock must be picked, which earns 50 XP. After that they will be able to sneak out.

However much in plain sight, once released none of the prisoners will be acknowledged by the Fiends.

Retrieved from "https://fallout.fandom.com/wiki/Rachael_(Fallout:_New_Vegas)?oldid=3171948"
Community content is available under CC-BY-SA unless otherwise noted.