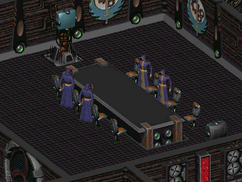 Rachael is seated at the lower right hand seat

Rachael is an elder of the Brotherhood, charged with making decisions in the bunker alongside High Elder Maxson and her fellow elders. They are all concerned about the rising super mutant threat from the north.

Rachael appears only in Fallout.

Retrieved from "https://fallout.fandom.com/wiki/Rachael_(Fallout)?oldid=3371455"
Community content is available under CC-BY-SA unless otherwise noted.