Rabbits are creatures that appear in Fallout 76.

Outwardly, the radrabbit survived the Great War relatively unscathed, except for losing most of its fur.[1] The rabbits survive and breed despite the hostile environment, avoiding any predator they may encounter.

Rabbits will not attack the player character, instead running away from any kind of combat.

Delbert Winters mentions that rabbits can be used to make soup.[2] 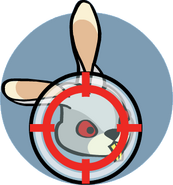 Hunting emote from the Atomic Shop 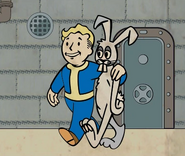 On the Fallout 4 perks chart