W05_Raider_RaRa
“I hope we find some other kids. Grown-ups are so boring sometimes.”

Ra-Ra is a child living in the Crater Core.

Ra-Ra was found by Gail, who acts as a surrogate mother to her. Since then, they have protected and taken care of each other. She is the only child living in the Crater and is disappointed that she has no other children to play with. She also does not know her actual name, and claims to be an only child.

Ra-Ra owns a stuffed rabbit toy called Bunnabun that she is very fond of. When encountered, she can be seen creating colorful chalk drawings on the floor.

Recently, Ra-Ra and Gail were playing "I Spy" by the Grafton Lake. Gail mentioned seeing something ugly, brown, and coming right at them. The animal took Bunnabun so Ra-Ra chased it into a pipe. She encountered robots and hid from them.

Ra-Ra appears only in Fallout 76, introduced in the Wastelanders update.

During the Ra-Ra rescue mission, the quest can become stuck within the facility. To prevent this, quickly enter the room beyond the third locked door by crawling through one of the ventilator shafts. This will trigger an Assaultron attack. After killing it, the previously locked door will be accessible.[verification overdue]

Ra-Ra during Fun and Games

Ra-Ra climbing through a vent

Ra-Ra before pressing the big red button out of curiosity 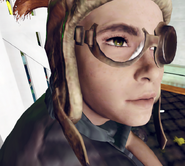 As depicted in Go for the Gold
Русский
Community content is available under CC-BY-SA unless otherwise noted.
... more about "Ra-Ra"
RDF feed
Has platform
PC +
Advertisement