Fallout: New Vegas
“Oh, that? It's just a bit west of Novac, up in the mountains. Lots of broken equipment and such. Place is deserted. Or used to be, I guess. Lately there's been talk of ghouls up that way, but I can't rightly say whether it's so or not. If you want to know more, ask old No-bark.”— Cliff Briscoe

The REPCONN test site is a former rocket testing facility located west of Novac and south of scorpion gulch. Its inhabitants consist of feral ghouls, Bright followers, and in the basement level, nightkin.

The location consists of the remains of the pre-War REPCONN Aerospace (Rocket Engineering Production Company of Nevada) Aerospace test plant, along with its landmark rocket launch dome. Before the war, the plant was managed by a corrupt executive who cut corners to save money, forcing employees to work overtime and when they quit, hired under-qualified, under-trained replacements. It was only a matter of time until an incident took place. And it did, in 2075. As RobCo was negotiating the terms of purchasing the company, REPCONN wanted to demonstrate its technology to gain an advantage in negotiations. However, a disastrous radiation spill occurred, contaminating the area for decades and effectively weakening REPCONN's bargaining position. When the company was acquired by RobCo, its proprietary plasma propulsion system was repurposed as a weapon.

The test site was abandoned after the Great War and left to the elements and prospectors for over two centuries, now irradiated and home to feral ghouls. Picking the massive facility apart became a source of revenue for many inhabitants living in the area, most importantly the settlers at Novac in the 23rd century. It was taken over around 2279 by the Bright Brotherhood, seeking to return the remaining rockets to functionality and make their "great journey" into space.

However, within the facility, a prolonged stalemate has begun between the ghouls and a band of nightkin, devolved from former residents of Jacobstown and led by a deranged nightkin named Davison. After losing nearly half their number, the ghouls holed up in the research laboratories, cornered by Davison's forces, who busied themselves with ripping the basement apart looking for a shipment of Stealth Boys accidentally routed to the test facility centuries ago.[Non-canon 1]

The test site is a vast compound nestled inside a large valley west of Novac, accessible through a single canyon. The area contains a reinforced checkpoint that was used to clear visitors and employees before the Great War. Though damaged by Novac scavengers, it was sturdy enough to be turned into an outer defensive position by the Bright Brotherhood ghouls, further enhanced with sandbags and a guard post just beyond the checkpoint to allow guards to rest and relax in between shifts.

It was not enough to deter the nightkin, who punched through the defenses leaving dead Brotherhood members in their wake and letting the feral ghouls, normally kept bottled up below the facility, wander out into the open and towards Novac.

The canyon leads down into the valley containing the test site. The roundabout with the rocket statue stands directly in front of the two main staircases leading into the building, with the road branching off further into the west, towards a now collapsed tunnel, and to the east, towards reservoirs of fuel and other materials used in REPCONN's research. The facility can be accessed by going up the stairs, through a collapsed section of the earthworks near the reservoirs, or a break in the chainlink fence beyond the collapsed tunnel. The building has two entrances, the main doors, and a side entrance.

The launch site opposite the building cannot be accessed. However, there is a depression by the western end, off of the road by a Joshua tree and burned-out car, with a small radioactive swamp. Following a path to the left will reveal a hatch leading to the facility's basement.

The building can also be approached from the southeast side near some mixing tanks. There are broken fences and some collapsed ground that will allow access to the concrete walkway that leads to the main entrance. If approached from the south and choosing to go towards the traffic circle, a combination of five ghouls or glowing ones will be encountered, and an additional two when approaching the main entrance.

The interior of the facility is filled with traces of combat, left behind by the Bright Brotherhood and the nightkin. Its corridors are filled with feral ghouls who have made their way out of containment and prowl the halls. A large number of microfusion cells and electron charge packs may be found on the dead Bright Brotherhood followers. Rarely, plasma defenders and laser RCWs can also be found on their corpses. The main entrance opens into the reception hall with a dead nightkin and two bathrooms. Evidence of recent violence can be seen here and throughout the facility.

The Easy locked door leads to the upper floor and a corridor that circumnavigates the upper floor. In the center are two Easy locked offices. The western room contains an Easy locked safe with a significant amount of loot, with 60 microfusion cells, 24 .308 rounds, and a hunting revolver to the right of the safe, while the eastern has some supplies. The west wing consists of a recreation room and cafeteria on the lower floor, with sleeping quarters, a server room, and two storage closets on the upper floor. There's also a main stairwell in the northwest corner directly next to the side entrance.

In the back are offices, containing several cubicles and other living quarters just above them. The top level contains another administrative section and the office of Steve Reynolds, the launch facility project manager, complete with a safe and message from disappointed employees. Most of the walls and ceilings are collapsed, linking rooms and floors together.

The eastern wing contains the cafeteria on the upper floor and eventually leads to the assembly hall where rockets were prepared and checked for launch. The ground floor is crawling with feral ghouls, and the walkways connect directly to the laboratories where Bright Brotherhood survivors and their leader Jason Bright took shelter. Next to the entrance to the assembly hall is the entrance to the basement, where the nightkin are found.

Located at the top of the facility, the research laboratories are where REPCONN once pioneered its rockets. Now it's the heart of the Bright Brotherhood and their refuge. Chris Haversam will immediately approach the player character as they enter and direct them to Jason Bright.

The laboratories have two levels, with the lower containing the primary lab in the center, an adjacent office space converted hastily into a dormitory, and is surrounded by a corridor that connects the exits to the stairwell in the facility and the assembly hall. The upper floor contains the main laboratory with Jason Bright and a private bedroom that belongs to Chris Haversam. There's a stockpile of anti-radiation drugs in his chambers. Both levels contain a workbench.

The launch observation platform is accessed from the research labs and contains the navigation console and launch control panel used to send rockets into space. If the control room is accessed before Haversam is spoken to in person, interacting with the intercom will result in the Courier asking "what's with the rockets" to which Haversam will get agitated and try to redirect the player character back to meet with Jason Bright once more.

The basement consists of several interlocking hallways and rooms. The entrance corridor leads to a workspace where a single nightkin lurks. The corridor beyond branches in two directions. The left-hand side leads directly to the storage room guarded by Harland, a trapped ghoul sharpshooter. Harland's room consists of a large room where he stands on a catwalk. The ground floor contains rigged shotguns, booby-trapped terminals, and bear traps. Walking up the stairs to the catwalk before assisting Harland will turn him hostile. On the second floor, a terminal can be accessed to find the Stealth Boy shipment update.

The righthand side leads to a room with Davison and Antler. The door behind Davison's back leads to another room with a console that opens the passageway into tunnels that connect the facility to the launch dome. These eventually lead to a branch, near a chamber with a reloading bench. The branch connects to the control room overlooking the launch chamber. The control room contains a workbench and a ladder that leads to the manhole near the swamp outside REPCONN, providing direct access to the underground.

The main section of the basement contains the servers, meeting room, and staff room, with two corridors connecting them together. Another corridor leads away from the staff area to the generator area, which consists of two halls with two levels each. The floors are separated by a chainlink fence, necessitating the use of adjacent stairwells.

The REPCONN test site appears only in Fallout: New Vegas.

The REPCONN test site is located in the same geographical area as the real world PEPCON (Pacific Engineering and Production Company of Nevada), a chemical plant formerly located in Henderson, Nevada. 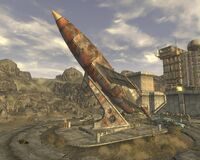 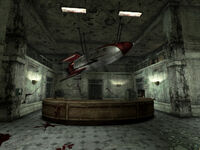 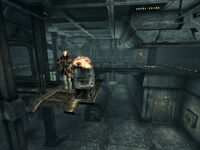 Harland's hideout in the basement 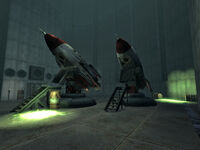 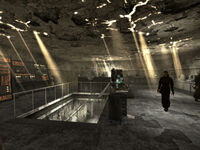 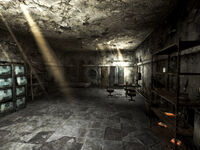 The Bright followers leaving for a better place

Do not even think about touching Antler

A broken rocket in the basement 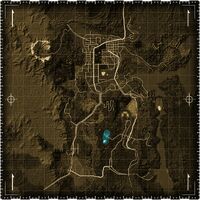