Play sound
Second_Chance.ogg
“Welcome to REPCONN Headquarters, Rocketeer! Come all this way to see our little facility, have you?

REPCONN headquarters is a location in the Mojave Wasteland in 2281. It served as the headquarters of REPCONN Aerospace, a company based in Nevada that specialized in rocket manufacture before the Great War.

REPCONN headquarters was the home office of REPCONN Aerospace (Rocket Engineering and Production COmpaNy of Nevada), located in Henderson.[Non-canon 1][Non-canon 2]

After the company was acquired by RobCo Industries in 2075, the building was overhauled, providing greatly increased security, so that they would be able to handle classified research. The security took the form of automatic facial recognition monitors, badge scanners, security locks and heavily armed sentry bots for defense. All employees were required to wear identification badges at all times, lest they be harmed by the security system.[1] The third floor was marked executives only, with the employees requiring a daily password to gain access.[2]

No amount of automated security could replace humans, however. A mole was delivering information on REPCONN's plasma rifle project undertaken at the headquarters to Poseidon Energy, their competitor. Although the fact was detected by the company's information services, no concrete evidence could be located to take official action against such industrial espionage.[3] REPCONN itself was guilty of industrial espionage, as their plasma rifle project relied in its final stages on Project SEMELE schematics acquired from Poseidon Energy.[4]

The project eventually produced the first working prototype, the Q-35 matter modulator. Poseidon Energy's mole, Julia Masters, was tasked with intercepting the prototype on its way to the Department of Defense. The weapon was never delivered, as its delivery was interrupted by the Great War.[5] The building was left abandoned for decades, haunted by its automated, self-maintaining security systems forever on watch for trespassers. The centuries were not kind, leading to structural damage in the building's shell, but not the electrical system and computers.

Upon entering the building, the Courier will find 3-5 Fiend corpses and a number of maintenance robots. The area has several locked doors and safes. The most notable is the Very Hard locked door that leads to the unique plasma rifle, the Q-35 matter modulator. This weapon can also be obtained via the second level through another locked door, however, this is only a Hard lock and not a Very Hard lock. There is a tour guide REPCONN robot that will greet the player character upon entering the facility. It will tell the player character to return between the hours of 10 AM and 5 PM (if it is not any time between then).

If the Courier chooses to wait, they will get to take a free tour, avoiding all lockpicking that is needed to get to the utility room located in the orrery where they will find Jenny Millet's security keycard. Along with the keycard, the player character can use the facial recognition database computer in the room behind the locked door the Fiend corpses are in front of, to bypass the security robots. The door can be unlocked by lockpicking or cracking the security terminal (both Average difficulty).

There are 12 hidden doors throughout the building (starting at the tour bot), which require 8 Perception in order to detect and 65 Repair to jam them closed. Jamming all of the doors closed is worth 540 XP (45 XP each).

Access to the second floor is gained by passing a 7 Intelligence challenge at one of the mobile facial recognition scanners. There is an option of using a Very Easy locked computer on this floor to add facial data to the database.

A second floor security card can be found in one of the rooms on this floor. It is in the same room as the terminal where the third-floor executive pass can be printed. This is required to get past the maintenance robots who will request the floor be vacated, even if visiting between the hours of 10 AM and 5 PM. There is a door that leads to a room "REPCONN Office Main Floor" that requires a keycard to access. Inside there is a hole in the floor that will lead to the unique Q-35 matter modulator plasma rifle, bypassing the Very Hard locked door and terminal.

There is a Hard locked terminal on this floor which can be used to print out a pass that allows safe passage on the top floor. To the left of this terminal, along the back wall, is a first aid box that may be invisible to the player character unless directly facing it.

In order to remain protected from the robots, a 7 or higher Luck or an Intelligence of 2 or less is required, which allows the player character to guess the password, which is "ice cream." Giving the correct password once is all that is required. A REPCONN third floor security card in Piers Isley's briefcase can be found close to two dead Brotherhood of Steel paladins near the main entrance to the third floor. In the room with an Average lock on the second floor (across the hall from the locked entrance to the main floor) is another terminal with an encrypted message on it. This contains the password to Isley's terminal on the third floor, which would otherwise need to be hacked. It is possible to destroy the mobile facial recognition scanners and sneak, but risks the release of sentry bots.

This location is one of the focal points of Still in the Dark, a quest for the Brotherhood of Steel, to find their missing patrol. The missing patrol can be found dead on the third floor, their T-51b power armor and laser rifles can be taken. Nearby lies a skeleton and Piers Isley's briefcase, containing 200 pre-War money and a REPCONN third floor security card allowing third-floor access without harassment from robots, as well as access to the Very Hard locked door (on the first floor) to the Q-35 Matter Modulator.

When the dialogue check on the second floor is passed (with Intelligence 7), the code given to the mobile facial recognition scanner is "09 F9 11 02 9D 74 E3 5B." This is a reference to the AACS encryption key controversy. 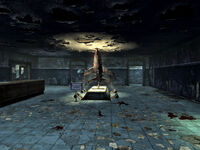 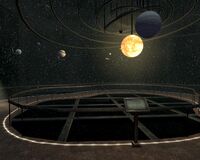 Display of the Solar System in REPCONN headquarters 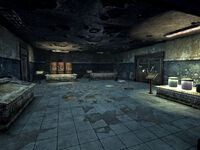 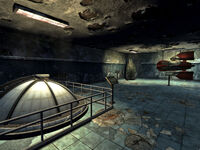 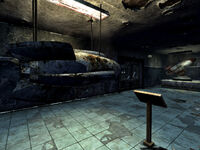 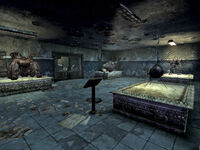 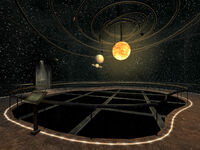 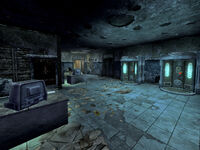 Terminal room, first room on the left after entering 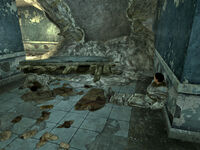 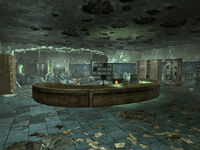 A sign promoting REPCONN HQ at the REPCONN test site

Nikola Tesla and You on the main floor 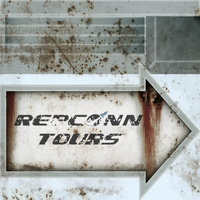