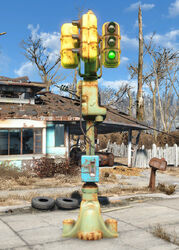 Allows settlers to roam the settlement freely while still performing their job. If an arena is present, settlers will gather there to spectate.

The quitting time siren is a constructible item in the Fallout 4 add-on Wasteland Workshop.

The quitting time siren is a modified pre-War intersection traffic light, used to alert settlers when it's time to take a break from their assigned tasks and spectate an arena battle. The siren contains a loud bell, which will ring each time the switch is tripped. The stoplights themselves will turn red or green depending on the mode, with red indicating time to work and green indicating break time.

When the green "break time" mode is activated, settlers will gather around the pre-defined arena grounds (marked by the area surrounding red and blue "team" platforms), and once the fight starts the spectating settlers will observe and cheer. Settlers will additionally use any nearby available seating while observing the fights.

When switched back to the red "work" mode, hostilities between the assigned combatants cease and all settlers will return to their assignments. In the absence of an arena, break time is taken literally: Settlers will find a seat and stay there, though they can also be found moving from seat to seat.

The quitting time siren can be found under Cages → Miscellaneous in the workshop.

Retrieved from "https://fallout.fandom.com/wiki/Quitting_time_siren?oldid=3429780"
Community content is available under CC-BY-SA unless otherwise noted.