The hometown of John Adams, John Quincy Adams and John Hancock, this town was briefly occupied by the Commonwealth Minutemen. However, the town was recently sieged by the Gunners after Clint, a fellow Minuteman, betrayed his own for a position of leadership in the Gunners. The abandoned town was repurposed as a Gunner fortress, with two distinct sections, including the town itself and the fortifications on the highway.[1]

Following the Quincy Massacre this area became controlled by the Gunners, and it remains so when the Sole Survivor encounters it. Baker will be on the church rooftop wielding a Fat Man. Inside of this unmarked church building is Sturges' terminal, which tells of Mama Murphy predicting an attack on the settlement and the settlers requesting help from the Minutemen, as well as a "couple suits of power armor" - Tessa's suit (the one that "won't start" and had to be dragged there), and the one lying on the overpass' wooden lookout, which Clint tries to reach in case of danger.

The last entry on Sturges' terminal is from a Gunner, stating that a small group escaped the attack and fled under the pursuit of a Gunner lieutenant and his squad; this presumably being the twenty people, including Preston Garvey and his group, whose numbers would diminish by the time of reaching Concord. There is a power armor station and a weapons workbench within the church. Another station is across the street at the Red Rocket to the west.

From the top of the church, one can reach the Gunner camp. The camp rests in the northern part of the ruins, on the freeway overpass. The overlook can be accessed by crossing any of three bridges connecting to the roofs of the adjacent church, the radio tower, and a house. The stronghold hosts several living quarters among the derelict cars, and a collapsed road in the western part leads to the second tier. This tier holds a watchtower and small command station between two trailers. The command center has a terminal and a steamer trunk. There is also a parking garage located in the south of the ruins, which contains two leveled radscorpions burrowed in the ground.

The Quincy ruins appear only in Fallout 4.

Quincy is based on the real world location of Quincy, Massachusetts. Quincy is the birthplace of notable people such as John Hancock, first signatory of the Declaration of Independence, John Adams, the second president of the United States, and his son John Quincy Adams, the sixth president.

Mama Murphy's note on the top floor of the Quincy Apartments 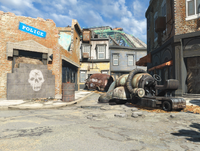