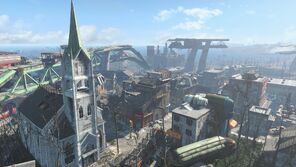 What remains of Quincy

Quincy was one of the largest and most prosperous settlements in the southeastern Commonwealth. Its prosperity became its undoing when the Gunners set their sights on the city, led by a former Minuteman called Clint. Disillusioned by the petty politics and bickering among the Minutemen, Clint joined forces with the Gunners, believing them to have the strength necessary to bring order to the Commonwealth.[1] The city would have been seized with barely any resistance, were it not for Mama Murphy. In a drug-induced trance, she had a vision of the town surrounded, overrun and its people dead or captured. At Sturges' insistence, Mayor Jackson put out a call for the Commonwealth Minutemen.[2] The people of the town were skeptical, especially Jun and Marcy Long, the town's chemists, who refused to fuel Murphy's addiction for a long while.[3]

They reversed their position when a Gunner advance party was spotted making its way towards the monorail. Despite the best efforts of the townsfolk, they continued to make headway until Colonel Ezra Hollis arrived and attacked the Gunners from behind.[4] A near-breakthrough turned into a rout, with the Minutemen killing a third of the recon force. Although a dozen Gunners retreated safely, Mayor Jackson was relieved and allowed the Minutemen to use his house as barracks. Col. Hollis' group immediately set to fortifying the town, assisted by Sturges, the town's mechanic. Keenly aware he didn't have nearly enough militiamen to hold the town once the Gunners commit to an attack, he put out a call for reinforcements.[5][6]

The town walls were repaired and the stairwell at the monorail platform filled to deny the Gunners access to higher ground. Meanwhile, Hollis had Sturges set up walkways and ramps over the rooftops, to give the defenders said advantage and the ability to retreat to the roofs in case the walls are breached and rally for a counterattack. Although they had enough food and supplies to withstand a long siege, the situation was grim: Nobody responded to the call for reinforcements. Hollis and the townsfolk stood alone against the Gunners, who kept probing the town's defenses every day.[7][8][9] The lack of central leadership after the untimely death of General Becker in 2282 caught up with the Minutemen,[10] after years of petty politics and squabbles over seniority.[11]

On the eve of the Massacre, Clint arrived at the town gates with Gunner sergeant Baker and Gunner officer Tessa. Hollis' hopes that he was bringing reinforcements were dashed when he revealed that he was there to negotiate the city's surrender. Hollis refused to lay down his arms and followed Clint all the way to the walls, shouting about what he would do to deserters.[1][12][13]

With surrender out of the question, the Gunners attacked the town under cover of night, executing Clint's plan. He blew out the highway's support, causing the road to collapse to the ground. Gunners rushed up the improvised ramp and attacked the defenders from their elevated firing positions. The nighttime assault combined with the decisive height advantage resulted in a total rout for Quincy's defenders. Despite a valiant effort on their part, they never stood a chance.[14][15] The town fell within an hour, with only a small group of twenty people slipping away under Preston Garvey's command.[16]

The Gunners seized the town and turned it into a fortress, with its citizens dead or driven away. Clint dispatched a detachment to track down and eliminate Garvey. They lost them in Jamaica Plain.[17] The group of refugees continued on to Lexington and Concord, steadily dwindling from twenty to just five survivors.[18] Colonel Ezra Hollis was captured alive and executed by Clint, to demonstrate his loyalty to the Gunners.[1]

The most lasting impact of the Massacre was the near-total destruction of the Minutemen as a military and political force in the Commonwealth. The remaining Minutemen gave up after the Massacre, joining other settlers in eking out an existence on the blasted Commonwealth soil.[9]

Clint was given command of Quincy by Captain Wes for his actions. Determined that the town would not be taken in the same way it had fallen to the Gunners. Clint fortified the highway, set up a radio tower, and procured two sets of power armor in order to defend it, keeping one set for himself and issuing Tessa with the other.[19]

Piper successfully convinces Danny Sullivan to open the gate by convincing him that the Sole Survivor is a trader from Quincy.[20]

The Quincy Massacre is mentioned only in Fallout 4.