Save Hillary Eastwood, the mayor.
Save Evita, the mayor's daughter.

Save all the hostages and prevent the destruction of generators.
Save Felix Stiles.
Help the ghouls.
Save Gorgi, Elliot's friend.

Quincy is the sixth mission in Fallout Tactics.

There are many objectives out there, but only two are crucial: to rescue the mayor and her daughter. Then the exit grid will appear, and you can leave this area. It is suggested you do not leave immediately.

The enemies will be Beastlords with their pet deathclaws and many bull-horn alarms. Using JHP bullets is suggested as the Beastlords are unarmored.

First talk to the Arlene, the woman at the starting point. Then climb up on the ladders on the side of the building marked 1 on the map. Climb down onto the balcony and kill the Beastlord commander upstairs. In the next room is the Hillary Eastwood, the Mayor who will give you three objectives (one required) and a key. There is also a key on the ground next to her, which you will need. Go back onto the balcony and climb back up on the roof. Open the door of the fenced-in siren, then use the switch. Having done this, if you are spotted and a Beastlord uses a bull-horn the others won't kill the hostages. Do not destroy the siren! Now either climb back down the side of the building or go downstairs and deal with the Beastlords and baby deathclaws.

In this mission it is strongly suggested trying to use the not-so obvious ways (use the ladders, back-doors, sniper nests), and handle one building at a time. Move east, up the large ramp into the Southern face of a large, grey building. This will be the hardest subquest. Go down the stairs in the northeast corner and turn off the lights. Try to kill the Beastlords, saving all 6 civilians in the room and not damaging the generators. Once the commander spots you, you have only one minute before the remote detonator traps in front of the generators explode. After combat ends, use the traps skill to disarm them, then pick them up. Or, if you kill the commander before she has the time to activate the remote detonation device, the timer will not appear and you will not have to operate under an minute mark. After you kill her you have to move quickly and kill the 4 other beast lords in the room before they shoot the civilians.

Return to the Mayor's building. Between it and the railway tracks is a long building. Climb onto its roof. Stay on the west side. Kill the deathclaw below and his master too. Climb back down and go inside the ghoul tent and talk with the leader, Elliot Nesting. He insists, "Ghouls are people to.

We're just different." which provokes a chorus of corrections from his cohorts, "Ghouls are people too!"

With your whole group go out of the west side of the tent, where the sandbag barricade is. Stand in a row, and start shooting. First the dogs, then the humans, later on the deathclaw family (one parent only). Run inside the building they came from and shoot down the remaining Beastlords. If you managed to save the captured ghoul (Gorgi, Elliot's friend) you will gain reputation, and new recruits. If you skip this whole thing the BoS will like you more.

Go North then travel east toward the church mentioned on the map. At this point you will notice that the Pip-Boy map has a large building in the center of the north edge of town, but it doesn't actually exist. Circle around behind the church to allow you to safely shoot the deathclaws inside through the back windows. There is metal armor Mk II in the chest.

Go cautiously south toward the big ominous rock. There hide two deathclaws and their Beastlord. Sneak towards the brothel. Use every possibility for covering. Place one sneaker next to the northern entrance (to kill the enemy in the doorway and one behind the western bar), and another to the western windows (where two Beastlords stand near a prostitute). Do not use burst mode or shotguns here, as the prostitutes are very weak. If you manage to win here with minimal (or hopefully no) casualities you will get a reputation boost. If you skip the whole thing the BoS will like you more.

Go to the town hall. Here they keep Evita Eastwood, the mayor's daughter hostage. Use the front door to enter, as there is a deathclaw inside, and so you will need the room to handle it. Go to the girl and talk with her. You can steal a key from her and take another from the nearby cabinet. Sneak in the backroom. You can kill all three sleeping Beastlords simultaneously, if you position your men well. As the mayor previously told you, there is a ladder in this room near the crates in the middle of the western wall. Go down. Beware of the two guards behind the flanges near the civilian corpse.

Go up into the detention center. Kill the Beastlord inside and then the Beastlord standing still at the northern entrance. You can even shoot the patrol and his baby deathclaw, using the south windows. If you try shooting them through the door a bandit on the roof will turn on a siren, and this is still dangerous as he stands next to a hostage; the hero-of-the-town, Warden Felix. Use the switch beside the jail cells to unlock the doors, then get the NeoStead Combat SG from the chest.

Then progress up the stairs to the roof. When you go outside no matter your skills you will be spotted once combat has begun and the town-hero might be shot. Your worst sneaker should stand behind the sleeping Beastlord. The best should crouch behind the two at the sandbags. The last sneaker should climb the closest tower. Then either turn to aggressive mode or enter turn-based combat. If you are lucky all the enemies die in the first round, without alerting the boss just a few steps away. Kill the remaining Beastlord in the other tower and Duff, the Beastlords' leader too. If the hero is still alive talk to him. From the tower you climbed you will be able to kill most of the remaining enemies safely.

To finish this mission go back and talk repeatedly with the mayor (you can meet her again later in Bunker Gamma). 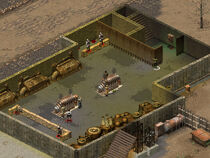 Kill the Beastlords and free the hostages before the generators explode 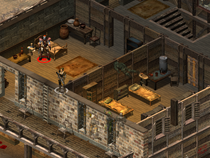 Beastlord commander, with Hillary Eastwood in the room next to it