Quincy is a location in Fallout Tactics, which can be reached from Bunker Beta.

Quincy is what remains of the pre-War Quincy, Illinois, known as the Gem City. It had a population of 38 in 2077. The town is home to both humans and ghouls, which sometimes leads to racial tensions.

The ghoul population of Quincy lives in a district called Shanty Town which lies on the western side of the tracks that run the length of the town. They have made the abandoned rail facilities their home.

Around 2197, the township of Quincy asked the Brotherhood of Steel for protection from a large group of tribals called the Beastlords. This threat was unique, because their raiding parties include various monsters from the wasteland including the deadly deathclaws.

The Beastlords, under the leadership of Duff the beastmaster and another unnamed Beastlord commander, took over certain parts of Quincy and were using hostages to ensure they have control over the rest of the town. Among those captured was Hillary Eastwood, the mayor. A Brotherhood squad was sent to rescue the mayor and assist in dealing with the Beastlords.

Other prominent citizens of Quincy at that time included Felix Stiles, the town's "war hero," Evita Eastwood, the mayor's daughter, Arlene, a woman who is in close relationship with the Eastwood family, Elliot Nesting, the self-appointed leader of the ghouls, and his brother Gorgi. There is also a brothel where all the prostitutes are ghouls, except one, who turns out to be a super mutant.

Sometime later, the Brotherhood was betrayed by a group of criminals from Quincy. The group of rogues poisoned a group of Brotherhood paladins as they stood vigil over the town. In their weakened state, the guards could barely defend themselves and the thieves looted (taking even their precious power armor). They stole a Brotherhood vehicle and left for the town of Cold Water, where they easily took control.

After a Brotherhood squad defeated the bandits, their bodies were displayed in crucifixion outside the town of Quincy, along with the guards that were on watch. The Brotherhood inquisitors also rounded up known friends and family of the criminals to an internment camp.

If the Warrior doesn't show much success in fighting beastlords, some of the citizens start to consider Marks Brothers as a potential ally instead of the Brotherhood.

Quincy appears only in Fallout Tactics.

Quincy is based on the real world location of Quincy, Illinois.

Underground passage between the town hall and the prison 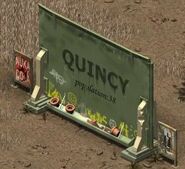