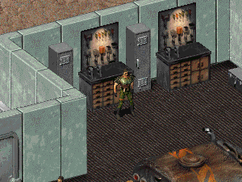 Quincy is an Enclave mechanic in 2241.

The head of Navarro's technical crew in the 2240s was Quincy, a man of skill and responsibility. Not nearly as hostile as Arch Dornan, he oversaw the work of mechanics and maintenance teams throughout the base as well as kept an accurate inventory of its assets. One of his main duties was the safekeeping of Vertibird plans.

He had a short temper towards those who, in his eyes, were incompetent or clumsy, especially when it resulted in the loss of inventory. He also had a long-running rivalry with Raul, the Enclave mechanic.

Get the vertibird plans for the Brotherhood of Steel: Raul can be told that Quincy insulted him. He will have a chat with Quincy. During this, the Chosen One can steal those plans.

While looking for K-9's repair parts, if the Chosen One tells Quincy that Raul in the northwest hangar sent them for the plans, there will be a dialogue option to tell Raul that Quincy wants to see him, whereupon Raul will walk off to beat Quincy up, leaving the Chosen One free to retrieve the K-9 motivator and the Vertibird plans during the fight.

Quincy appears only in Fallout 2.

Retrieved from "https://fallout.fandom.com/wiki/Quincy_(Fallout_2)?oldid=3347229"
Community content is available under CC-BY-SA unless otherwise noted.