Queen of the Hunt 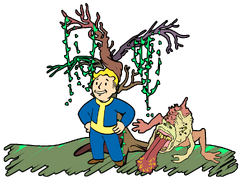 Queen of the Hunt

Complete Queen of the Hunt

“Hunt down the cryptid before it disappears.”

Daily: Queen of the Hunt is a daily quest in Fallout 76.

Continuing Shelby O'Rourke's research into cryptids, the player character must visit three locations in the Mire that may have a creature lurking in it. The quest is started by reading the terminal at the hunter's shack. The targeted locations may include Site Alpha, Site Beta, Site Delta, Site Epsilon and Site Gamma. Although the first shares its name with an Appalachian missile silo, they are not the same location.

One of these locations will have a cryptid such as the wendigo, the Flatwoods monster, the Grafton monster, a snallygaster or the mothman. Although the other investigated sites may have creatures of their own, only the cryptid needs to be killed. After extracting a tissue sample from the cryptid's body, the player character must return to the hunter's shack and deposit it in the tissue analyzer there. Once the analyzer is done, the quest completes, and the player character is granted a temporary status effect that increases damage dealt to the target cryptid for some time.

There is a long-standing bug that disables this mission in-game, preventing the player from acquiring or undertaking the quest chain. The quest may be granted upon daily login, but most of the time, it is never accessible. If the quest is not completable due to a bug then you can complete it with another team member who has it active, allowing the bugged player to kill and harvest a cryptid as well as analyze the sample and complete the quest.[verified]

Retrieved from "https://fallout.fandom.com/wiki/Queen_of_the_Hunt?oldid=3418282"
Community content is available under CC-BY-SA unless otherwise noted.