Queen of the Deathclaws!

“A Raider calling herself the Queen of the Deathclaws has been terrorizing the Wasteland!”

Queen of the Deathclaws! is a single-stage overseer quest in Fallout Shelter.

The self proclaimed "Queen of the Deathclaws" is in fact, a raider. She has apparently raised a deathclaw that grew to become the alpha of it's small pack. This unprecedented skill wielded by such an unscrupulous person, and the deathclaws themselves, are potentially a major threat and can be dealt with before it escalates.

Heading back to the ground floor and taking the elevator down, there will be a group of four raiders in the left room. The floor below that is the alpha deathclaw accompanied by two deathclaws. Defeat them and the first main objective will be completed.

Taking the elevator on the far right, will lead to a group of five raiders in the right room. In the far left room is the Queen of the Deathclaws accompanied by four raiders. Defeating her will fulfill the second main objective. There may also be a legendary outfit recipe in the room. 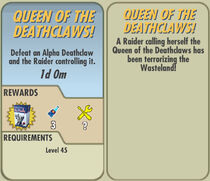 Rewards
Add an image to this gallery
Retrieved from "https://fallout.fandom.com/wiki/Queen_of_the_Deathclaws!?oldid=3276357"
Community content is available under CC-BY-SA unless otherwise noted.