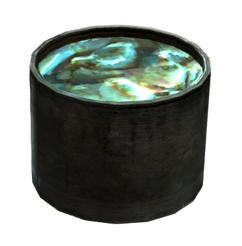 Queen Nukalurk meat is a consumable item in the Fallout 4 add-on Nuka-World.

A container of meat taken from a Nukalurk queen. It restores 120 Hit Points and temporarily increases the Sole Survivor's Endurance by 2, but confers 30 Rads in the process. The meat can be used to make grilled queen Nukalurk at a cooking station.

It can be obtained from the Nukalurk queen after defeating her during the quest A World of Refreshment.

Since only a single Nukalurk queen is ever encountered, only one piece of Queen Nukalurk meat can be acquired (two with issue #9 of the Wasteland Survival Guide.

Retrieved from "https://fallout.fandom.com/wiki/Queen_Nukalurk_meat?oldid=3288137"
Community content is available under CC-BY-SA unless otherwise noted.