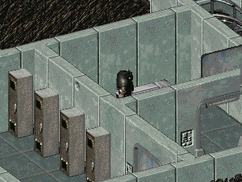 “What the... I can see why you're here. You obviously want to get rid of that antique suit you're wearing.”

The quartermaster is the overseer of equipment issuance's to Enclave personnel at Navarro around 2241.

He is a pretty easy-going fellow with close relations to the base's drill sergeant, Arch Dornan and a similar, but not quite-so-extreme, intolerance for bullshit. He has a brother with stunted mental development serving in the Enclave Armed Forces.

The Navarro quartermaster appears only in Fallout 2.

Retrieved from "https://fallout.fandom.com/wiki/Quartermaster_(Fallout_2)?oldid=3404023"
Community content is available under CC-BY-SA unless otherwise noted.