Fallout: New Vegas
“I can't believe that an entire pack moved into the quarry, I thought that kind of bad luck only happened in New Vegas.”— Chomps Lewis

Quarry Junction is an abandoned limestone quarry in the Mojave Wasteland in 2281. It is overrun by deathclaws.

The quarry is the primary source of limestone used for mixing cement and concrete used by New California Republic engineers in construction, primarily fortifications against Caesar's Legion. The materials mined here are sent to Boulder City for mixing by rail and from there to the various construction sites along the Colorado River. The workers benefit greatly from old pre-War draglines present on site, which increases their output tremendously, despite needing some percussive maintenance from time to time.[1] The only drawback is that workers are paid in NCR dollars, rather than the Hub's bottle caps; the former is a somewhat less stable fiat currency after a history of the NCR being unable to sustain its original gold reserve backing, whereas the latter is still backed by exchange for fixed amounts of fresh water by the merchants of the Hub.[2]

The recent NCRCF prison break put a damper on these plans, however, as the Powder Gangers made off with the supply of dynamite used for blasting. To make things worse, deathclaws moved into the quarry after all the noise and human activity subsided. The workers find themselves without work and without prospects for the future. They are waiting for someone to come and help, as they are in no shape to challenge deathclaws.[3] While they were waiting they constructed warning signs around the now incredibly dangerous area of the Mojave.[4]

The quarry has two entrances, including one entrance that is found by traveling on the road northeast of Sloan. Another entrance is next to the Great Khan encampment to the west of Quarry Junction, between Goodsprings Cemetery and Quarry Junction. This entrance has members of the Great Khans nearby, waiting to complete a drug deal. The rest of the quarry has natural borders made of large mountains and limestone deposits that prevent entry. The workers and residents of Sloan have even posted signs near the quarry warning travelers that there are deathclaws in that area, even as far as Goodsprings Cemetery.

There are many deathclaws guarding both entrances, and the inside contains even more. There are also young deathclaws, a deathclaw alpha male, and the deathclaw mother with her litter of babies. She's walking around at the back of the quarry near her den, which includes human remains and a super stimpak.

Path that leads to the quarry

Excavator with a warning for deathclaws

Side view of the dragline

Give mom some space 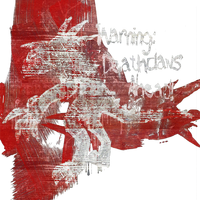 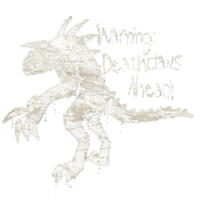