Rapid Reload
(-0.8s)
“That data we received from Xuan did the trick. We managed to get a stable build model. I don't think this weapon is ready for mass production yet, but it should show that we have a working prototype. We should be able to get these issues resolved in a later build.”— Matter modulator project holotape

Plasma rifles or plasma casters are high tech weapons firing superheated bolts of plasma, powered by either microfusion cells, heavy energy cells, plasma cartridges, or plasma cores which find numerous applications in military and industrial fields. The bolts form into toroids in the plasma chamber, which are then sent down a superconducting barrel.[2][3][4] However, the plasma bolt chamber can be hotwired in order to accelerate the bolt formation process, effectively turbocharging the rifle.[5] The primary damage mechanism of plasma rifles is thermal transfer, causing serious burns to soft targets and melting hard ones. In extreme cases, the plasma can cause spontaneous dissolution of the target, including separation of soft tissues from hard ones or wholesale molecular destabilization that turns the target into a viscous green fluid.

Initially, the weapon was a bulky, industrial plasma caster, manufactured by Winchester Arms; while it performed admirably, it was expensive and required specialized training to use. An additional model known as the Gatling plasma, made in a similar fashion to the Gatling laser, would also come into use.

Also known as the V.35 Quantum plasma modulation matter injection rifle, the Q-35 matter modulator was created by REPCONN Aerospace engineers as part of the Quantum Plasma Modulation Matter Injection Rifle project,[1] a research program overseen by Colonel Moretti of the United States Army,[6] who was looking for a replacement for the aging plasma rifle designs, especially the Winchester P94.[7]

The prototype, whose three previous versions (V.32, V.33, V.34) had failed,[1] was created by a team of engineers under the leadership of Senior Staff Engineer Xuan Duong, using design specifications stolen from Poseidon Energy for the canceled plasma rifle initiative, Project SEMELE, in conjunction with designs from their own plasma engine, the failed quantum matter modulator of the Z43-521P rocket. Poseidon data allowed the REPCONN team to rectify issues with matter inversion by using a polarized quantum spin, simultaneously solving the issues with matter conversion in the Heisenberg compensation field, enabling the creation of the first prototype of a new line of plasma weapons.[6]

With the data from the SEMELE project, REPCONN was finally able to create a functional prototype. While prototype materials make it unsuitable for prolonged field use, the Q-35 has a longer refire rate on average, but a more consistent delay between shots, an increase in active bolt charge time, increased accuracy and a 30% increase in bolt energy.[1]

When the prototype was completed, individuals suspected to be working for Poseidon Energy[8] conspired with REPCONN's CFO, Julia Masters, to intercept and secure the prototype while it was in transit to the Department of Defense.[9]

There are numerous differences between this weapon and the standard variant in terms of combat capability:

As with most unique weapons, this weapon cannot receive modifications. Its projectile velocity is similar to that of its standard variant with the magnetic accelerator modification. It also has a dark red and black color scheme as opposed to the normal gray; the microfusion cells used as ammunition also follow the color scheme and appear red and black. This causes the cells to appear similar to electron charge packs.

The Q-35 matter modulator can fire a total of about 1,245 times using standard cells, the equivalent of 104 reloads, from full condition before breaking. Despite being considered "unsuitable for prolonged field use," it has the second highest item HP of all the rifle type energy weapons (the laser RCW having the highest), at 250 HP; more than triple the durability of a standard plasma rifle (which has 75 HP).

The weapon is located on the REPCONN headquarters main floor, behind a Very Hard locked (100 Lockpick skill to open) door. A wall terminal (100 Science to hack) next to the door can also be used and can be unlocked with the keycard in a briefcase on the third floor, near the remains of the Brotherhood of Steel paladins.

Alternatively, taking the stairs (near the aforementioned door) to the second floor, turning left, continuing forward and taking the next three rights leads to a Hard locked door (75 Lockpick skill to open) which allows access to the room containing the weapon through a hole in the ground.

When viewed in the first person, the plasma arcs in the ampoules on the side may not be visible, and often not in the third person when at certain angles. 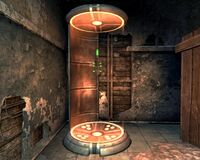 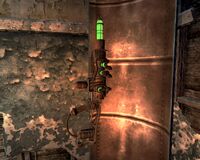