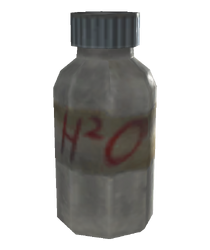 Purified water is a drink in Fallout 3.

Purified water is water that is completely free of radiation, and as such can be safely consumed without harming the player. In addition, it also heals far more than dirty water does. It's relatively rare in the wastes, but can be requested from Wadsworth or Godfrey inside My Megaton house or Tenpenny Tower suite respectively, at a maximum of 5 per week.

Purified water can be given to Micky outside Megaton, Carlos outside of Rivet City, or Willy in front of Tenpenny Tower for positive Karma. This introduces the possibility of infinite good Karma, as they will never stop asking for more water.

Similarly, purified water can also be given to Ben Canning as part of a random encounter. Unlike the beggars however, he will also take dirty water for the same reward. In fact, the game will prioritize giving him dirty water over purified water.

Each bottle of purified water appears to feature the text "'H²O" hand written on the label on the side of the bottle. This format is incorrect (at least according to IUPAC nomenclature), as chemical formula numbers are written in subscript (Xy) and not in superscript (Xy).

Drainage chamber Signal Oscar Tango
Add a photo to this gallery
Retrieved from "https://fallout.fandom.com/wiki/Purified_water_(Fallout_3)?oldid=3499178"
Community content is available under CC-BY-SA unless otherwise noted.