Start a Wiki
One Man, and a Crate of Puppets character 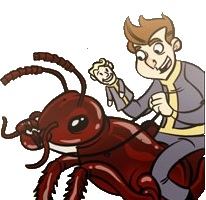 “The Vaults were never meant to save anyone.”— Narrator

The Puppet Man or Vault 77 dweller was a man who entered Vault 77 when the Great War started. Once inside, he discovered that he was the only living person there, accompanied only by a crate of puppets as part of the vault experiment. His real name has never been revealed to the public.

The legend of the Puppet ManEdit

Upon entering the vault, it is clear he has no idea what is going on. Paranoia immediately sets in, evidenced by his screaming "HEY! You forgot all the other fucking people!!" In the first few months, the Vault 77 dweller went through the initial panic and depression caused by being locked alone in a vault. He didn't actually open the puppet crate until one year, three months and twelve days after the lock-up. When he finally does open the crate, he finds puppets of a dog (later named Reverend Hound, the local clergyman, and sheriff), a grandmother, and a king. He gives each a personality and engages in an extended puppet show to stave off boredom and ease his isolation.

Later, he hears a voice from inside the crate and discovers a Vault Boy puppet he had originally overlooked. Soon, the king is 'murdered' and found with his head ripped off. The Puppet Man asks the Vault Boy puppet if he did it, as he doubted Granny or Reverend Hound could ever do such a thing. Vault Boy confesses not only to the murder but also admits to the fact that the Puppet Man was his accomplice. Puppet Man realizes that Reverend Hound will come for them both and decides to leave the vault. His initial excursion lasts less than a minute; after opening the vault door, he encounters a gigantic radscorpion holding a car in each claw. He immediately closes the door and decides to "sleep on it."

The Vault 77 dweller is eventually successful in leaving the vault, and acquires a giant ant named Mr. Pinch as a mount. He is very optimistic in regards to the outside world, noting while it was hot for December, he wasn't really a snow person. He encounters a mysterious ghoul with only one arm, wearing a vault suit without a visible number, possibly one of the evacuees from Vault 12.

He is later seen captured by two slavers and warns them not to mess with his Vault Boy puppet as he is crazy and has "killed before." One of the two slavers contemplates whether to make him a slave or if he should serve him as food, the second remarks that he is pretty hungry. He killed the first slaver, Bob, and tracked the second one to the slaver's base where for the first time he was called by the nickname The Puppet Man.[1] In the end, it is not known what has happened to the man or the blood-stained puppet who both disappeared with a smile on their faces. Vault 77 was labeled as a bad idea but the comic reminds that "the vaults were never meant to save anyone."[2]

His location and living status is currently unknown. The Lone Wanderer can find the Puppet Man's Vault 77 jumpsuit in Paradise Falls slavers' possession, along with a holotape labeled "Burn this Goddamn Jumpsuit." In it, an unnamed slaver requests that the jumpsuit be destroyed fearing that its former wearer may come back for revenge. The Vault 77 jumpsuit grants a +5 to both Unarmed and Melee Weapons, both the killing ways of the Puppet Man. It also looks brand new despite likely being around 200 years old. The slavers will comment that they still fear him, even when not currently present.

The Puppet Man appears in the official Fallout 3 webcomic One Man, and a Crate of Puppets, written by Jerry Holkins and illustrated by Mike Krahulik, in cooperation with Emil Pagliarulo.[3] In Fallout 3, his vault suit is found in Paradise Falls, as well as his holotape.

He appeared on a Fallout 3 poster displayed at Penny Arcade Expo (PAX) 2008, which showed him holding a Vault Boy puppet covered with blood.[4]

One of the fan-created perks entered in the Fallout 10th-anniversary contest was "Puppet Master" which reads, "You have a special little friend, who has followed you through thick and thin, and always has an opinion about things. Gain an extra dialogue option."

Retrieved from "https://fallout.fandom.com/wiki/Puppet_Man?oldid=3185154"
Community content is available under CC-BY-SA unless otherwise noted.