Punga fruit refers to a series of three consumable items in the Fallout 3 add-on Point Lookout. 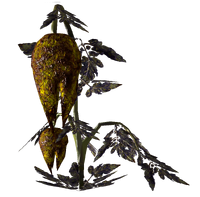 Punga is an edible type of fruit endemic to the Point Lookout area, obtained from mutated bushes growing in the warm, moist climate of the regional swamps. The largest plant of this type, Mother Punga, demonstrates just how well adapted the plant is to the post-nuclear environment of Point Lookout.

In appearance, punga bushes have ovate leaves with a serrated margin and acute tips. The plant has one or more main stems without leaves, from which branches develop which carry the leaves themselves. Punga fruit plants flower at a single point at the terminus of their stems, gradually developing into large, fleshy fruits with a yellow-brown, rough and thick skin. Apart from excellent nutrition, the fruit has unique properties that enable it to remove radiation from the body and boost its natural healing abilities. The same substances that make that possible also make it highly addictive.[1] The fruits also contain edible seeds, which, if left to gestate, eventually break the skin of the ripe fruit and emerge on stems growing from the core of the fruit, allowing the plant to proliferate.[2]

The punga fruit's properties led to it being used by Point Lookout tribals under the leadership of Jackson. Having set up a sophisticated hydroponics farm in the Ark & Dove Cathedral, he was able to generate a crop surplus and create a selectively bred derivative. Exporting the crop across the Atlantic coast through Tobar, they are able to secure income as well as a steady trickle of new converts, seeking more fruit to fuel their addiction.[1]

Some Point Lookout locals also managed to develop ways of using the punga-derived commodities, like alcoholic beverages.[3] Punga fruit also contains electrolytes that allow it to become a battery with the right electrodes inserted into the flesh, much like pre-War lemon batteries.[4]

Wild punga bushes can be identified by their ovate leaves with a serrated margin and acute tips and the large fruit they carry. The plant has one or more main stems without leaves, from which branches develop which carry the leaves themselves. Punga fruit plants flower at a single point at the terminus of their stems, gradually developing into large, fleshy fruits with a yellow/brown, thick skin. They are common throughout Point Lookout, due to the unique conditions offered by the swamps, and the further unique function of scrubbing radiation from the system and healing at the same time.

A cultivar of the wild punga fruit, developed by Jackson and his tribe. Grown in hydroponic farms at the Ark & Dove cathedral, the "refined" punga fruit benefits greatly from the stable supply of water and fertilizer. The plant has a lighter green color than its wild cousin, while its fruit is bigger and generally softer to the touch. Their nutritional qualities are also improved as well.

Edible seeds produced by the Mother Punga plant, they are potent hallucinogenic properties and are taken as a rite of passage in Point Lookout tribal customs. In appearance, they are black, rounded pods with the white seeds clearly visible inside. 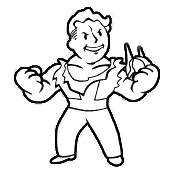 As depicted in Punga Power!

Retrieved from "https://fallout.fandom.com/wiki/Punga_fruit?oldid=3459535"
Community content is available under CC-BY-SA unless otherwise noted.