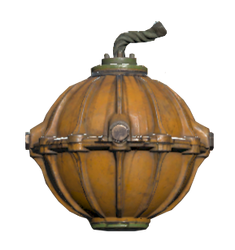 Fire in the Hole

The pumpkin grenade is a throwing weapon in Fallout 76.

A radiation grenade resembling a tiny pumpkin. Targets hit by its explosion will take pure health damage and radiation for five seconds.

Retrieved from "https://fallout.fandom.com/wiki/Pumpkin_grenade?oldid=3505687"
Community content is available under CC-BY-SA unless otherwise noted.