“This is the prototype for a modified electromagnetic pulse weapon.”

The pulse rifle prototype is an energy weapon in Fallout Tactics.

This is the prototype for a modified electromagnetic pulse weapon. It was developed by the Reavers, who offered it to the Brotherhood of Steel in exchange for rescuing the main Reaver camp in Newton from the Calculator's robotic forces.

It's an EMP device that has a devastating effect on electronics, which makes it an effective weapon against robots.

In a safe in Tobias Peste's hideout in Newton. 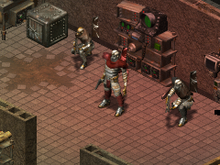 The prototype is in the safe in the high-left corner
Polski Русский
Community content is available under CC-BY-SA unless otherwise noted.