Rapid Reload
(-0.5s)
“Huh. Figured it would have more buttons and dials and stuff, you know? Oh, well. It's still the electronic equivalent of a disease from Gomorrah.”— Veronica Santangelo

The pulse gun is a weapon in Fallout: New Vegas.

The pulse gun is an electromagnetic pulse (EMP) based weapon. It delivers additional bonus damage to robots and those wearing power armor.

When fired, the pulse gun suffers from a small delay before discharging, due to its building up the charge for the pulse. This results in the need to continue aiming at a target after pulling the trigger to ensure a hit. As a weapon, the pulse gun is only effective against robots and power armor opponents, since it only delivers a small amount of impact damage otherwise.

Because of the amount of impact damage and the EMP bonus damage being constant, it is essentially unaffected by different ammunition types, perks, chems and energy weapon skill level. Additionally, the pulse gun is also ineffective against NCR salvaged power armor, mainly due to the fact that the armor has had all its joint servomotors removed and is no longer power armor in the traditional sense.

The pulse gun can fire a total of about 495 times using standard cells, the equivalent of 99 reloads, from full condition before breaking.

The footlocker with the pulse gun in Vault 34's armory 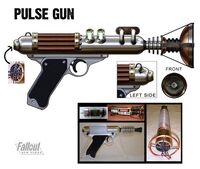