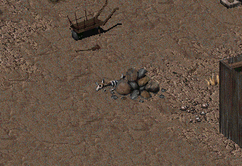 “This is a tragedy, believe me. Nothing is the way it used to be. I have a small farm outside town and a few days ago a bunch of Raiders appeared out of nowhere and now use my home as their camp. They killed Pugsley, my donkey and they threatened to kill me if I ever dare to come back.”— Irwin

Pugsley was a mule in 2161 that belonged to Irwin (a Hub refugee) and lived with him on a farm, until a group of raiders attacked the farm and killed him.

Pugsley's remains appear only in Fallout.

Retrieved from "https://fallout.fandom.com/wiki/Pugsley?oldid=3143514"
Community content is available under CC-BY-SA unless otherwise noted.