“Low tech tribal weapon made from a fungus. It releases a cloud of toxic spores when compressed.”

The puffer is a trap found in Fallout Tactics.

The Puffer functions exactly the same as one of the other land mines. It doesn't need to be used or set on an object, it can be set anywhere. It also poisons anything hit by it. This trap, as is to be expected, has very little effect against robots.

It is found early in the game and is most commonly used by Beastlords. 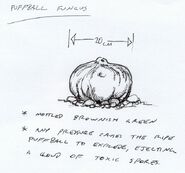 Puffer concept art
Add a photo to this gallery
Retrieved from "https://fallout.fandom.com/wiki/Puffer?oldid=3057049"
Community content is available under CC-BY-SA unless otherwise noted.