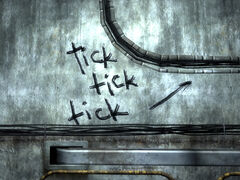 Graffiti in the switching station, pointing towards a speaker.

“Got a worse grease smell down here than Danny Parker's hair on Opening Night.”— Dean Domino

The Puesta del Sol switching station is a location in the Sierra Madre's Puesta del Sol, where Christine is sent to perform her part in the opening ceremony.

The first room contains two terminals with various lore, a Lover's Mark stash, and the electric box which must be repaired for the Mixed Signals quest. The electric box can be repaired with a Repair of 60 (there is a Fixin' Things on the large box to the left of the locked door), with three of the electric box fuses found in locations in the Puesta del Sol area.

The passageway which begins at the far end of the room contains a series of three shootable speakers. Each of the three is made a bit easier to locate by the graffiti on the walls reading "tick tick tick," along with arrows pointing toward the speakers. The first is up and to the right as one leaves the first room; the second is around the next corner in the alcove with a console, and the third is up in the rafters on the left just before the passage ends in a ledge in the next large room. Alternatively, there are safe spots between some of the speakers which one can find if one wishes simply to run forward.

The large room ahead initially has its lower reaches obscured by toxic red cloud, and the walkway across to the pathway forward (the doorway marked "Utility") is missing. For brute force progress forward, one can descend the steps and rush through the cloud to the other side, but note there are several bear traps hidden in the cloud. Alternatively, one can descend only one set of stairs to the first small landing, and leap across to the large pipe to the east, and run across it to reach the other side with minimal cloud exposure.

At the of southwest end of the room, a small room module contains a Dean's Electronics and a terminal to shut off some nearby speakers, including the shielded speaker right above the room module itself. A deadly tripwire trap is concealed by a corpse right before the terminal--the grenade bouquet is hidden up between the second and third consoles on the far wall as one enters the module, and even if one has Light Step the tripwire can be triggered if the paint gun on the ground is kicked. Reaching the terminal safely to shut off the speaker is of course much simpler when one is traveling with Christine, leaving time to disarm either the tripwire or the grenade bouquet before going to the terminal. Once this is accomplished or ignored, one can proceed to the north end of the room and head east through the door to the Utility room.

The Utility area is a series of two small rooms and contains the ventilation console for removing most of the toxic cloud from the Puesta del Sol north area, a terminal with lore, some armor-piercing ammo for the automatic rifle, and the remote maintenance terminal password in Ennis's locker, which is Very Hard locked but a key can be found later sitting on a desk at the southeast end of the final room.

The final room begins with both a turret and a shielded speaker, and there are gaps in the catwalks which can require careful jumping or detours. The speaker can be shut down at a terminal in the small room module directly across to the east, but the door requires a 75 Lockpick to access. There is likewise a 75 Science terminal to shut down the turret located in a small alcove room halfway down the west wall.

Once these threats are dealt with or bypassed, the elevator for the Mixed Signals quest can be found in the southwest module of the room, next to the remote maintenance terminal which can improve that quest's outcome. The Vending machine code for the holorifle reinf. components can also be found in this room on a console against the west wall. The elevator also allows one to travel "up" and reach a quicker exit back to the Puesta del Sol area without traveling back through the building.

A Chinese Army: Special Ops Training Manual can be found in this room as well, on a catwalk in the south-central part of the room: there is a huge machine on the south side of the room (but north of the module containing the terminals). The book is located on the catwalk that runs around the machine. It is the only portion of catwalk in this room that one has to jump to.