Mixed Signals
Strike Up the Band

Puesta del Sol is a location in the Sierra Madre in 2281.

There are two sides to Puesta del Sol, North, and South. There are at least two levels in most areas, often allowing the player character to move safely on rooftops or balconies. This can be invaluable in avoiding red clouds and passing through radio sources safely.

While exploring the northern half of Puesta del Sol, it is worth bearing in mind that although much of the ground level of the area is initially covered in toxic red cloud, most of it can be cleared away at the ventilation console in the Puesta del Sol switching station. Thus, leaving most of the cloud-filled areas until after a trip to the switching station to turn on the ventilation may make looting the rest of the level easier.

Upon entry through the gate from the Villa, a fight with two ghost people will soon ensue, with two more nearby around the corner to the north. A total of at least eight ghost people (and a couple of radroaches) inhabit the area when one arrives for the first time.

The large courtyard just to the west of the Villa gate has two locked gates: the gate to the west leads to the initially locked service route; likewise, the gate to Puesta del Sol south is locked until reached from the other side.

Therefore the way forward lies northwards following the arrow, although one can likewise choose to travel north through the hole in the building just beyond the Villa gate, collecting various miscellaneous loot.

Given that so much of the ground level is covered in toxic Cloud, perhaps the most important hole in the wall is the one to the west and facing the southern wall - this is the first hole on the left side as one heads north from the first intersection (and indeed the first one on the left since the Villa entrance if one followed the wall all the way around). Again, the various scrawled arrows guide directly to it.

This hole provides rooftop access up to the third floor, from whence one can access much of the rest of the area from the rooftop level without needing to traverse as much Cloud. After crossing the wooden planks, one reaches the zone to pick up the radio frequency "743.00Hz ULF" (Elijah's frequency). There is a bear trap right behind the ledge at the end of the planks.

One can then drop down on the north side to the lower roof - continuing to follow the arrows - and stay on the awnings to reach a series of rooms with terminals. The second terminal, in a room with a radio which can be turned off or shot, allows activation of a friendly security hologram in the street below, who will engage with any nearby ghost people.

After accessing all three terminals at each successive hole in the wall, one can cross the awnings to the north side of the street, where one will see graffiti "Gala is the only way in!" By turning northward at this point and remaining on the awnings until the last minute, one can reach the Puesta del Sol switching station having passed through little or no toxic cloud. Likewise, by continuing at street level from this point, heading around to the south and southeast, one has an unclouded approach to the unlocked door to Puesta del Sol south.

Meanwhile, once one has turned the ventilation system back on from the switching station, most of the cloud in the level clears. This makes the following areas much easier to access:

Upon entering this area through the gate for the first time, a battle with two nearby ghost people will likely ensue; a total of six of them populate the area upon the Courier's initial arrival.

The areas west and south-west of the intersection one first arrives form an optional excursion - in the sense that they contain useful loot but are not required to complete a quest. By making a quick trip west, even if one does not wish to descend into the large cloud-filled area, one will have a line of sight to a shootable speaker disguised as the lower part of the statue hanging over the courtyard now to the south. Eliminating this speaker will make subsequent exploration of the area easier -- it can then be entered without passing through the cloud by traveling due south from the initial gate. The Very Hard locked terminal allows a friendly security hologram to be activated, who will engage enemies detected in the cloud-filled courtyard. The Vending machine code - "Demolition charge" can be found in this area in the room with the pool table.

Meanwhile, the primary ground-level structure of the rest of the level is a U-shaped semi-circle of the main street which begins at the entry gate, heads south, bends gradually eastward, and then bends north, arriving at the main gate to Puesta del Sol north -- the one locked when encountered from the other side, but now enabled once opened from this side. Near the south end of the U-shaped street, just before the road passes through a narrow archway, a hole in the wall on the north/left side leads to a small shop in which several cash registers and the Vending machine code - "Buffout" can be found. The shop also has a Sierra Madre vending machine.

Off the southeast part of the U-shaped main street is a moderate-sized cloud-filled square. The brute force approach to leading Dean Domino to his position for the Strike Up the Band quest is to pass straight through this section and into the building at the back, from whence one can climb to the goal location. However, this position can also be reached over the rooftops without passing through the cloud through use of the ruined cafe.

The ground-level entrance to the ruined cafe adjoins the gate where one initially enters the area. On the upper level, there are two exits, one to the east and one to the south. The southern exit allows access to the rooftops heading back toward the entrance to the level, but also allows access to the highest rooftop, the one in the center of the western half of the area. Here one can locate a steel grating leading to the very top, where the Vending machine code - "Hologram rifle - advanced calibration" can be found along with a considerable amount of ammunition for the holorifle.

Meanwhile, the eastern exit from the top of the ruined store allows access to rooftops in the eastern section. A quick trip left, and one rapidly finds a hole in the wall leading to a room with one of the terminals needed to activate a friendly security hologram useful in Strike Up the Band. However if one then travels the opposite way around the rooftops, heading back to the right, one eventually reaches the southeastern side of the square. A wooden blockade across the balcony makes it seem as if further progress is not possible (and perhaps it was intended for it not to be), but by skirting the edge of the blockade one can easily continue along the roofline to reach Dean Domino's position for Strike Up the Band without passing through the cloud, instead reaching the position via the terminal that activates the second of the two security holograms needed for the quest.

At the rooftop location one is supposed to take Dean Domino, the Vending machine code - "Automatic rifle - upgraded internals" can be found next to the wire Dean is meant to connect. One can then drop down to the northeast side of the cloud-filled square to reach some lootable rooms through a second-story hole, and then by continuing around the rooftop reach a ruined store, which contains some locked areas with miscellaneous loot but also a doorway leading directly back to Puesta del Sol north, where one can jump from a tree near the Villa gate. 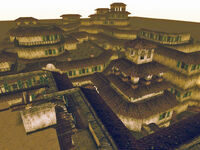 4 of Diamonds and Jack of Spades