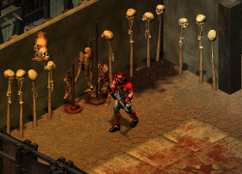 “Little bugs! You won't be slipping past me, little bugs! You skitter and scatter around us, but we can hear you in the walls, oh yes we can! Master Gargantua would not be pleased to see you, little bugs. He despises the little insects almost as much as I. They make him mad . . . and I can't let the insects make the master mad! Time to splat you, buggy-wuggy-bugs!”

Psycho is a raider in Devil's Graveyard in the year 2197.

Psycho was one of two main henchmen (along with an unnamed raider lieutenant, who was killed in Dirt Haven) of Gargantua, the raider boss. He is a complete madman who considers everyone who oppose him and his comrades insects, unworthy of living. Judging by his room, he enjoys torturing his victims. He is absolutely loyal to Gargantua, considering him his master.

He was killed by a group of Brotherhood of Steel initiates.

Psycho appears only in the Fallout Tactics demo.

Retrieved from "https://fallout.fandom.com/wiki/Psycho_(character)?oldid=2751267"
Community content is available under CC-BY-SA unless otherwise noted.