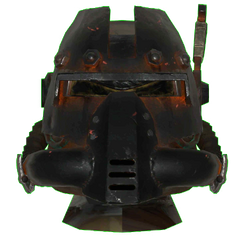 The prototype steel mill paint is a paint scheme in the Fallout 76 update Wastelanders.

As part of a federal contract, the Grafton Steel company began work on a series of projects with the primary goal of increasing the steel yield of their mills and a secondary goal of developing new kinds of steel products for the military sector.[1] One such project, Project Pheonix, sought to achieve these goals through the creation of a brand of civilian power armor geared toward industrial applications. This model would not only allow workers to withstand and work under extreme temperatures but also to service machinery without stopping up the whole works. Unlike Garrahan Mining Co.'s EX-17 Excavator power armor which inspired it, the model developed by Grafton was based around the more advanced T-51b model of power armor instead of the earlier T-45. However, while a working prototype for the helmet was successfully built and tested, the Great War would occur before the rest of the armor could be completed, leaving the project incomplete.

A standard T-51 helmet retrofitted with heavy steel plating on the face of the armor, this thick armor increases the wearer's resistance to damage of all kinds. The level 50 resistances are 68 ballistic, 81 energy, and 49 radiation.

The paint is unlocked upon looting the power armor frame in the maglocked room of Grafton Steel Underground. The room is only accessible during the Fun and Games quest, after which it is unobtainable.

Retrieved from "https://fallout.fandom.com/wiki/Prototype_steel_mill_paint?oldid=3476890"
Community content is available under CC-BY-SA unless otherwise noted.