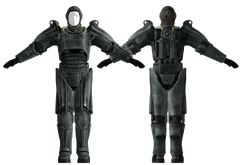 The MP-47/A prototype medic power armor is a U.S. Army variant of T-45d power armor. It was designed to administer medical attention to the user as necessary during combat.

The prototype medic power armor has the ability to administer Med-X, which it will do if the wearer's health drops below 33% or if a limb's health drops below 25%. Med-X will be dispensed every 2.5 (in-game) hours. Unlike standard Med-X injections, this process carries no risk of addiction. However, it does draw from the wearer's supply of Med-X, and thus the feature is useless if none are carried. Its outward appearance is nearly identical to the T-45d power armor series, apart from the shoulders, which have US military roundels on them rather than Brotherhood of Steel insignia.

In addition to the Med-X dispensing system, the armor features an onboard voice that resembles a Mister Gutsy in terms of sound and personality. The voice, similar to a follower, will sound alerts if it detects an enemy presence, which may help the Lone Wanderer notice enemies before the ticks show up on the compass.

As noted in the accompanying manual, the prototype version of the suit lacks the ability to dispense anything other than Med-X, whereas the completed version would have had a wider range of features, such as deploying stimpaks. The armor was planned as an automatic medical supply dispenser, meaning troops would not have to be evacuated for medical treatment. The user manual found with the armor details that the final version was to also include a lethal chemical that would trigger if the soldier deserted.

Check this initiate for the armor 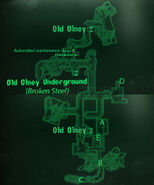