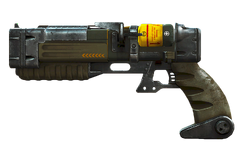 The Prototype UP77 "Limitless Potential" is a unique laser pistol/rifle in Fallout 4.

This unique laser gun possesses the Never Ending effect, which grants an unlimited magazine capacity and never needs to be reloaded, but still requires ammunition to fire.

The specific weapon modifications fitted to the gun when found are level dependent and will vary.

The UP77 is found in University Credit Union at University Point. Inside the Credit Union, one will find a bank vault with a Novice-locked terminal. After hacking and opening the vault's door, the Sole Survivor will be in a room with some locked safes. On the second row, there will be a Master-locked safe; opening the safe will reveal a red button. Pressing it will open a wall to the right and on the large table in the middle of the room will be the UP77.

In the Prima game guide, this weapon is falsely listed as Prototype PA77. It also says it is inside of a safe.

Sniper rifle variant
Add an image to this gallery
Retrieved from "https://fallout.fandom.com/wiki/Prototype_UP77_%22Limitless_Potential%22?oldid=3199144"
Community content is available under CC-BY-SA unless otherwise noted.