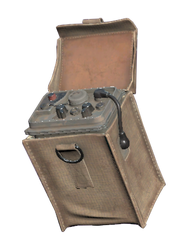 Temporary invisibility (20 seconds). It is disabled if the user attacks.

A catchall term for several devices reverse-engineered from captured Chinese stealth armor, Stealth Boys work by generating a refracting light field around its user, making them nearly invisible to the untrained eye. The model seen in Appalachia is the bulkier satchel model, rather than the wrist-mounted RobCo 3001 model. Worn on the waist, and with a smaller battery than later models, it is capable of generating a stealth field around the user for a short amount of time.

Compared to the Stealth Boy found in Adventure mode, the prototype Stealth Boy has a shorter duration, only lasting 20 seconds. The stealth field's effects are disabled if the user attacks.

Retrieved from "https://fallout.fandom.com/wiki/Prototype_Stealth_Boy?oldid=3231741"
Community content is available under CC-BY-SA unless otherwise noted.