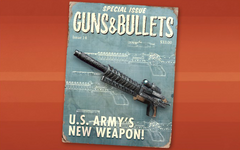 “Wielded with deadly effect before the Great War, the Prototype Gauss Rifle uses electromagnetic induction to shoot a projectile at tremendous speed. It is, in essence, a sniper's best friend.”

The Gauss rifle appears to be a sleek chrome weapon, similar to its counterparts in Fallout 2, Fallout 3 and Fallout: New Vegas and looks almost exactly like its Anchorage-era counterpart. The Gauss rifle is able to be modified at a weapon workbench to include a shielded barrel, buttstock, and a suppressor.

Coils run down the far half of the gun, chrome coated and shrouding most of the barrel in the center of them. The weapon is operated using a crank which loads additional 2mm EC cartridges into the weapon. Up to a maximum of three can be loaded for three times the damage, similar to the laser musket.

On the left side of a weapon is a 'magazine' however, unlike the Anchorage version, the projectile is stored in the ammunition so the use of protrusion is unclear. When fired, as with the Gauss rifle, it leaves a temporary blue light trailing after the projectile, dispersing after a few seconds.

The Gauss rifle is chambered for the rare and expensive 2mm EC rounds as opposed to the microfusion cells used by the Anchorage-era variants. Gauss rifle shots produce a bluish explosion upon impact. This enables the Gauss rifle to hit multiple targets with a single shot, provided they are clustered together in very close proximity to each other.

"Want a piece of me?" Gunner commander with the prototype Gauss rifle