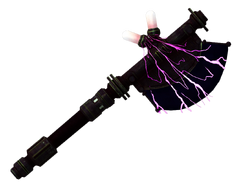 Moving several axes from your inventory to a container may cause the game to freeze, OR if you already have some in a container and hover over them.[verified]

Protonic inversal throwing axe explosion
Add a photo to this gallery
Retrieved from "https://fallout.fandom.com/wiki/Protonic_inversal_throwing_axe?oldid=3499689"
Community content is available under CC-BY-SA unless otherwise noted.