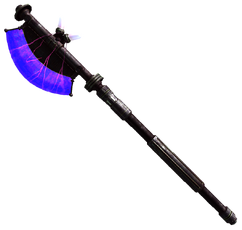 The protonic inversal axe is a weapon in the Fallout: New Vegas add-on Old World Blues.

The protonic inversal axe is a variant of the proton axe, having a dark blue-violet blade, whitish capacitors, and a black handle. Compared to the standard proton axe, it deals increased damage and much more critical damage, in addition to being much more durable. It is a very effective melee weapon against just about any enemy, especially robots or power armor users.

It has a special Inversal Scarifier attack that does 200% damage in V.A.T.S. at the cost of 10 more action points (requires a Melee skill of 50). Note that this attack may strike more than one opponent, but is not guaranteed to do so even if the animation indicates that it passed through other opponents.

It is possible to execute Inversal Scarifier outside of V.A.T.S. (without the required Melee skill of 50 to perform the move) by initiating a power attack (hold attack button) while moving forward.

The protonic inversal axe can successfully strike about 1245 times from full condition before breaking.

The axe in the X-13 research facility
Русский Українська
Community content is available under CC-BY-SA unless otherwise noted.
Advertisement