Fallout 3
“Violence will not be tolerated.”

Protectrons are a type of robot encountered in the Capital Wasteland in 2277.

Many Protectrons were commissioned by the U.S. Army before the Great War of 2077. They are painted a dark olive drab with a white star on their chest. These mechanized soldiers still wander the wastes, attacking everything from radroaches to Brotherhood Outcasts. The Pitt adds a new variety of Protectron called the "factory Protectron", which lacks a glass dome but possesses a single ocular lens and a cage around the combat inhibitor. The top of where the dome would be appears to be made to look like a construction hard-hat and the body has a yellow coloration. Broken Steel adds "Enclave Protectrons," which appear to be much newer, with red glass domes and a polished steel-gray finish. A special red-painted Protectron also appears at the House of Wares in Point Lookout.

A Protectron with the basic personality loaded can execute "sequences", lists of tasks to complete, such as patrolling an area for intruders or scanning passengers for tickets, in the case of the metro station Protectrons. Some sequences may have been programmed by RobCo Industries, while others were written by robotics technicians at the locations where they are used. When not in use, a Protectron unit is stored in a base pod, which also charges its battery. The Protectron is connected to its base pod via radio uplink, and the pod is in turn linked to a control terminal or computer system, which can be hacked to release the Protectron from stasis.

All Protectrons come with a combat inhibitor mounted on their back that allows them to selectively target opponents, depending on pre-programmed guidelines. The combat inhibitor is generally left exposed, making it easy to disable when approaching a Protectron from behind. When the combat inhibitor is crippled, the robot will fly into a frenzy, automatically targeting the nearest possible target, regardless of any previous affiliation.

All Protectrons have three laser weapons: one in each arm and another in their domed head. Due to it being similar to a laser pistol, they are ineffective at long-range attacks. Protectrons also lack any melee attack, and are slow to turn 180 degrees, leaving them vulnerable to attackers staying directly behind them.

Both operational and destroyed protectrons can be found throughout the wasteland.

Metro Protectrons are found in many metro stations. When approached, they will ask the Lone Wanderer for a metro ticket. If they possess one, then it will be automatically taken from the player character's inventory and the Protectron will remain friendly, continuing to walk around the metro station attacking any enemies. Otherwise, the Protectron will turn hostile. On the Red and Blue metros in D.C., the associated red and blue pass cards serve this purpose. Metro Protectrons have the same stats as the standard Protectrons, despite their mundane functions.

This model of Protectron is only found active on the Nuka-Cola plant's factory floor. They are easily identified due to their distinctive color scheme, possessing a red border around their head and hands, with the logo of the Nuka-Cola Corporation emblazoned on their body. They are programmed with a generic guarding routine where they attack all intruders on sight. As part of this program, their speech systems are designed to fill in their owner's name with a recording (in this case, the recording is, "Nuka Cola!").

This model of Protectron can be found in the Nuka-Cola plant's storage and mixing vats room, along with a Nukalurk. It is located in a holding pod and can be activated by the nearby terminal. If activated, it will then begin to patrol the room, confused but friendly. The factory Protectron will request to see the Lone Wanderer's office ID, and if they do not have an ID in their inventory, the Protectron turns hostile. If an ID card has been acquired, the Protectron will remain friendly, and will attack the Nukalurks.

These heavy duty industrial robots feature a reinforced "head", a cage on their backs to help guard the combat inhibitor and a distinctive yellow coloring. Markings on the left side of the "head" read CP 1143-85. This model of Protectron can be found in the Pitt steelyard, the Pitt underground and in the supply plant.

This deactivated Protectron appears only during the quest Reilly's Rangers. It will be found in a storage room of the Statesman Hotel's restaurant. Once the Lone Wanderer has reached the roof, Butcher will direct them to Donovan who asks them to retrieve the robot's fission battery, so it can be used to repair the broken elevator.

A one of a kind named Protectron model, which is locked up in a holding pod in the National Archives' Archival Strongroom. Unlike the Thomas Jefferson robot, it cannot be reprogrammed during the last part of the quest Stealing Independence. It has the same appearance as Button Gwinnett. It was always intended to be a standby protection unit ready to be programmed in case any of the historical reenactor protection units broke down.

This Protectron model has been reprogrammed by the Brotherhood Outcasts, and is generally found being used as a sentry or to supplement Outcast patrols. One can be found patrolling the overpass bridge near Fort Independence, while others may be randomly encountered with Brotherhood Outcast patrols near Vault 101 or the Scrapyard. Outcast Protectrons do not have the blue color of the common Protectron, nor the typical Outcast red paint job, but are instead decorated with a rusty, brownish color. They will sometimes refrain from assisting other Outcasts, such as during the raider attack on Fort Independence.

The Art of Fallout 3 states that during development, Emil Pagliarulo's input on every robot was to "make it more like Robby the Robot." The protectron's original design went through many iterations before artists settled on a design that has "the vintage character of Robby" and that "captures the quintessential 1950's robot character more than any other."[1] 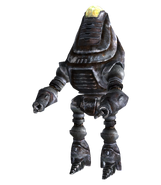 Protectron model in stasis pod in the robot repair center 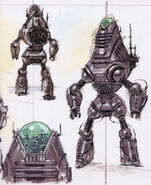 Early iteration of the final design... 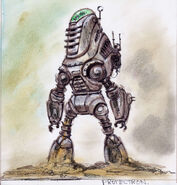 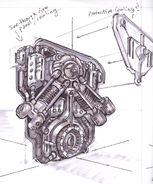 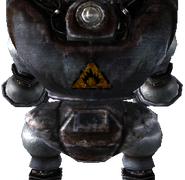 There are several unused model attachments for the Protectron. 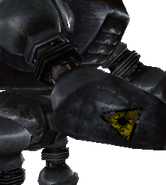 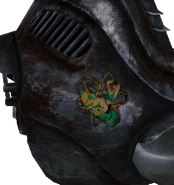 The model name for this decal associates it with Megaton. The only Protectron in Megaton is Deputy Weld, who is completely generic. 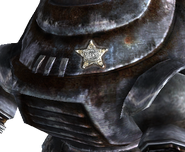 A sheriff's badge. Once again, Deputy Weld may relate.

These numbers appear in the decal texture file but aren't set up as proper model attachments. 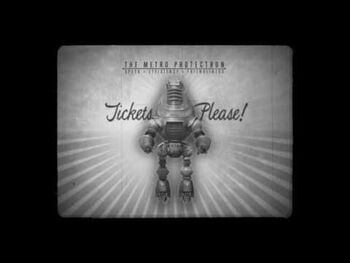