View source
watch 24:51
Fallout Interactive Experience
Do you like this video?
Play Sound
“The sturdy Protectron model of robot was created before the great war, and served as a security automaton in both the private and business sectors.”— Fallout 3 loading screen

Protectrons are a model of robot which appears in Fallout 3, Fallout: New Vegas, Fallout 4 and Fallout 76.

One of the most widespread and popular models in RobCo Industries' catalogue. The Protectron was designed as an inexpensive work drone, capable of performing a wide variety of tasks from construction, through security, to office duties.[1] Produced from at least 2063, it's a compact, bipedal work drone with a pair of manipulators and integrated lasers for self-defense.[2] The large dome contains the primary optic sensors (usually three) and the central processing unit that contains the robot's synthetic personality. For ease of maintenance, the Protectron is typically powered by a fission battery.[3][4] As it was not intended for combat, at least not as a direct combatant, the Protectron only has a thin alloyed shell meant to protect its internal components from the environment and damage that could be sustained in the course of its duties. However, the internal temperature of certain Protectrons can reach up to 1000 degrees for cooking foods, giving them extreme internal heat resistance.[5] The head assembly is typically shielded by a semi-transparent or opaque dome from reinforced glass. Although various hardware modifications were introduced before the war to enhance its effectiveness.[6][7]

Apart from the standard body, RobCo also offered construction drones with a shielded, reinforced head, emergency light, and internal power tools like nailguns.[8] Firefighter models with an internal cryo gun for fire suppression and additional protection from fire and debris.[9] Medic units with built-in defibrillators and[10] reinforced police models with tasers, stronger servomotors, and armored heads.[11] Even factory models could be customized with a variety of software and synthetic personalities to enhance its performance. This ability to customize made it a popular choice for both the private and public sectors.[12] These included the R04 V9 "Office Helper" personality[13] with integrated office protocols and scheduling software,[14] RS3 V4.1.6 "Utility Helper"[15] with remote maintenance routine download capability[16] and pest extermination programs,[17] and the RX2 V1.16.4 "Vault Helper",[18] with all the necessary Vault protocols.[19] Protectrons usually came with a special pod, for storage, maintenance, and recharging,[20] and the Standard Protectron Control Interface v2.40 installed on terminals connected to the pod and responsible for controlling Protectrons slaved to it.[21]

The introduction of the Protectron harmfully affected the situation of workers in the United States.[22] Although companies would deny that the introduction of robotic workers was meant to replace human workers,[23] the reality was that any company where Protectrons or other robots were introduced would soon see mass layoffs.[24] In one particular instance, a Pittsburgh steel mill decided to lay off all of its workers[25] citing budget cuts and the need to shut the plant down. When the workers started an occupation strike,[26] the company simply allowed the new Protectron fleet to enter the facility and gun down the striking workers down to the last man.[27][28]

In Fallout 3, Fallout: New Vegas and Fallout 4, Protectrons are the second-weakest robot variant encountered, with only eyebots having less firepower. They do not pose much of a threat due to their weaker weaponry and slow speed. They are equipped with dual hand-lasers as well as a head-laser so that if one weapon is disabled, the Protectron can still function in battle. They are not as common in Fallout: New Vegas as they are in Fallout 3; they are in every metro station in the latter, whereas in Fallout: New Vegas, they are mostly found patrolling a few office buildings and the Securitron vault.

A terminal inside Sunset Sarsaparilla headquarters in Fallout: New Vegas mentions robots being shipped to the factory to replace the human workers.[29] In Fallout 3, a few examples of these Protectrons can be found inside the Mill in The Pitt, although they are already deactivated.

Metro Protectrons are a model of Protectron found in Washington, D.C.'s metro stations that will ask for a passing person's metro ticket when activated, which will be removed from the inventory. Without a ticket, the Protectron will attack.

Nuka-Cola security Protectrons are found in the Nuka-Cola plant. They have the Nuka-Cola Corporation logo on them as well as red coloring around their head and hands. A deactivated one is found in Fallout: New Vegas, in the Lucky 38 penthouse.

Outcast Protectrons are Protectrons reprogrammed by the Brotherhood Outcasts. They are found patrolling with Outcast patrols or outside of their bases.

These factory Protectrons are found in the Pitt steelyard and were being used as a replacement for human labor within the steel mills. They are heavy-duty industrial robots, featuring a reinforced "head" part, a protective cage on the back, and distinctive yellow coloring.

Shipping workers are Protectrons found in the Sunset Sarsaparilla headquarters. There are only two of them, and they can be found on the bottom floor of the factory with the bottle cap press machine.

The Protectron Mark series was an attempt by scientists in Big MT to improve on the base model of Protectron built by RobCo. These Protectrons come in six versions, Marks I-VI. Mark I is on par with the Protectrons found in the Sunset Sarsaparilla headquarters, while the other marks are scaled on increasing durability based on the player character's level. However, the firepower on each Mark series is the same.

The Art of Fallout 3 states that during development, Emil Pagliarulo's input on every robot was to "make it more like Robby the Robot." The protectron's original design went through many iterations before artists settled on a design that has "the vintage character of Robby" and that "captures the quintessential 1950's robot character more than any other."[30] 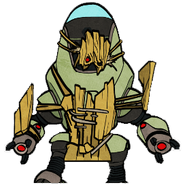 A Protectron, as shown on the unimplemented Thin Skinned perk card 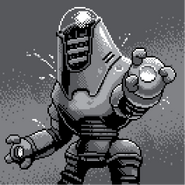