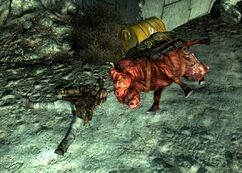 “As long as they keep paying us in caps and tech, we'll keep escorting the water.”— Lepelletier

Protecting the Water Way is a Fallout 3 side quest that is available with the Broken Steel add-on.

Scribe Bigsley asks the Lone Wanderer to investigate the organized bandit attacks on the Aqua Pura caravans, directing The Lone Wanderer to speak with Officer Lepelletier of Rivet City to learn more details about the attacks. It should be noted that Scribe Bigsley doesn't have to be spoken to at all; Officer Lepelletier will give the quest as well.

Officer Lepelletier can be found on the first floor of the ramp area entrance of Rivet City. She will explain that a water caravan heading towards Canterbury Commons has just left the Jefferson Memorial and will ask the player character to travel with the caravan and discover who is behind the hijacking. They are further are asked to catch up with the caravan, and speak with Officers Davis and Lorin who are escorting it. Passing an easy Speech check with Lepelletier will net a plasma rifle and a few microfusion cells before departing to protect the caravan.

Following the river leads the player character to the caravan just as it is ambushed by three bandits. The ambush point seems to be at a constant location, under the large bridge between the Citadel and the D.C. Ruins. It is very difficult, but possible to save the lives of the two guards but the caravan driver will always be dead. There is also a scavenger camped out under the bridge who will help fight the bandits and can possibly be saved as well.

Find out who is responsible for the attacks[edit | edit source]

Upon searching any of the bandits, a holotape titled New meeting place from Split Jack, the bandit leader, will be discovered. The holotape instructs the bandits to regroup at Wilhelm's Wharf and includes the password (mirelurk stew) to avoid being attacked.

Deal with Split Jack and his gang[edit | edit source]

When reaching Wilhelm's Wharf, the player character can speak to Split Jack (the password is "mirelurk stew") and pass a difficult Speech challenge to persuade him to give up. Note that if the Speech check is passed successfully then Grandma Sparkle is likely to be immediately killed by the bandits. Failing that, Jack has to be killed either simply by attacking him and his men, or by joining his gang and then slaying him in a duel for leadership of the gang.

If choosing to join their gang, the Lone Wanderer will receive a metal armor and helmet, which must be worn before Split Jack will talk again. He will ask the player character to sit down and wait for "other gang members to arrive". However, no matter if the player sits and waits or not, no further events are triggered. This is most likely because the other "gang members" were the ones killed at the ambush. At this time the player character can go speak with Split Jack and pass a Speech check convincing him that no one would pay for the waters if they could just get it for free, in this scenario Split Jack would simply call off his scheme and take off with his gang to "blow off some steam". Alternatively, Split Jack can be challenged to a fight to the death, in which case he lets the player character choose one of three melee weapons to fight with (lead pipe, combat knife or nail board). As long as he is fought with the weapon he gives, none of the gang members attack and will instead cheer on the fight.

The melee fight is by no means a push-over, as Split Jack has high HP and blocks well. More importantly, the item HP of the chosen weapon is low, making it quite possible that the weapon will break before Jack is dead. It can, however, be replaced with another weapon of the same type, or repaired the instant he gives it. If Jack is hit with fists or any other weapon, the entire gang will become hostile. Note that any follower will attack and cause the rest of the gang to become hostile so it may prove prudent to be alone or tell the follower to wait inside Grandma Sparkle's house.

After the duel, one of the unnamed bandits will approach, stating that while they do not want another leader, the Lone Wanderer should speak with Lepelletier about a "protection" contract. The player character will be able to interact with the bandits again after making a choice with Lepelletier (see below). It is possible that even if using the weapon Split Jack gives, the bandits will turn hostile after winning the duel, making further dialogue with them impossible.

If choosing not to side with the bandits, Lepelletier thanks for the assistance, but is unable to give any reward. She then asks the player character to speak to Scribe Bigsley in order to receive the reward which consists of some captured Enclave gear - Enclave power armor and matching helmet, a gatling laser, a plasma pistol and ammunition for the same. The quest will finish then.

If choosing to join the bandits after killing Split Jack, two extortionist options will be available that will both decrease Karma (by 200 points). The first option is to blackmail Lepelletier for 500 caps immediately after passing a Speech check in exchange for stopping the attacks. The Lone Wanderer can tell her that they want 500 caps now, and 500 caps after the attacks have stopped, but she will refuse and still only give them 500 caps. The second option is to make her pay a weekly "protection fee" of 200 caps for the bandits' stopping their attacks. If choosing the latter, the bandits can periodically be spoken to at the wharf for a share of the 200 caps for the rest of the game. The quest will complete upon finishing these dialogue options.

If any of the evil options are chosen, Lepelletier will tell the player character that she will kill them if ever talk to her again; and indeed, if she is spoken to again, she becomes hostile, as well as the Rivet City guards outside the ship (but not inside the city itself). Meanwhile, if any option other than the "protection fee" is chosen, the remaining bandits at the wharf will accuse the player character of backstabbing and attack them on sight.

At the ambush site:

Retrieved from "https://fallout.fandom.com/wiki/Protecting_the_Water_Way?oldid=3350798"
Community content is available under CC-BY-SA unless otherwise noted.