A prostitute is someone who engages in sexual acts for money. Like virtually all other forms of illegal activity, prostitution flourished in the decline of law and order that followed the Great War. 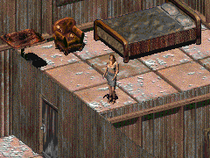 Synthia the "Sellababe"
Add a photo to this gallery

A hooker dancing in front of the Gomorrah casino

A stripper doing a pole dance in the Omerta's Casino

Dazzle, a prostitute found in the Gomorrah courtyard

Maude, the elderly prostitute that works in the Casa Madrid Apartments

Sweetie, the red-headed prostitute in the Casa Madrid Apartments
Add a photo to this gallery
Retrieved from "https://fallout.fandom.com/wiki/Prostitution?oldid=3240617"
Community content is available under CC-BY-SA unless otherwise noted.