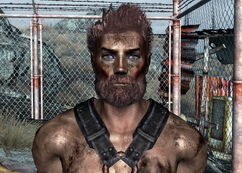 “That guy over there on the mattress died last night. I never did get his name. If you don't mind the smell, you can just take his.”

Prosper is a slave located in the Capital Wasteland at the train tunnel in 2277.

Paranoid, nervous, and usually careful, Prosper was a smuggler, ferrying several large cargos of ingots from the steelyard of the Pitt to outlying areas. His operation was soon compromised and his crew mostly butchered. The survivors were sold to slavers heading toward Paradise Falls.[1]

Prosper appears only in the Fallout 3 add-on The Pitt.

If the Lone Wanderer asks Prosper for the clothes off his own back, the dialogue option reads, "I need your clothes. Give them to me. Now." This is a reference to a recurring line in The Terminator movie series.[2]

Retrieved from "https://fallout.fandom.com/wiki/Prosper?oldid=3439822"
Community content is available under CC-BY-SA unless otherwise noted.