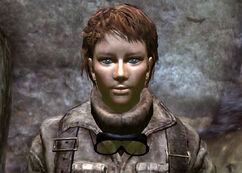 The prospector merchant is a merchant in the Mojave Wasteland in 2281.

A female prospector merchant, the only one in the game, selling various wares. She walks around in the cave-area, just in front of the interior shack. She and the others will only appear after the Prospector's Den has been cleared out of Jackals.

The prospector merchant appears only in Fallout: New Vegas.

Retrieved from "https://fallout.fandom.com/wiki/Prospector_merchant?oldid=3369984"
Community content is available under CC-BY-SA unless otherwise noted.