Back in the Saddle
Ghost Town Gunfight

Fallout: New Vegas
“If you're looking to wet your whistle, just past Chet's is the Prospector Saloon. The bartender there, Trudy, knows everyone in town.”— Doc Mitchell

The Prospector Saloon is a saloon located in Goodsprings in 2281.

The saloon is owned by Trudy, who has a small office in the front. A pool table and jukebox are located to the right of the bar and seating area to the left. The bathrooms are in the back. Old advertisements for Vegas entertainers hang on the walls. The gentlemen's room appears to be used as a broom closet, with janitorial supplies cluttered inside. To enter the adjacent room, a Very Easy lock can be picked. A Goodsprings settler will often be sitting at the bar. He returns to his residence at 10 PM. If killed, his inventory contains a prospector outfit, cowboy hat, and a .357 Magnum revolver in half condition. There is also a .357 Magnum in a drinking glass behind the bar.

A few skill magazines are found in the saloon, including Fixin' Things, Meeting People, and Salesman Weekly. Across from the desk with the terminal in Trudy's office is a crate that often has 2 of the 3 magazines. The third is always on a counter near the pool table. A distillery and a few jugs of moonshine can be found in the office. Both Trudy's office and the distillery jut out of the saloon's general shape and are distinctly made of metal, so they are likely additions to the saloon's original construction. The word "saloon" on the building sign is made of a motley assortment of neon letters.

Sunny Smiles begins the game here and initiates the tutorial quest Back in the Saddle when the Courier first arrives. Trudy and Joe Cobb arrive once the tutorial quest is complete or declined. After the completion of the Ghost Town Gunfight quest, Ringo stays there until the Courier travels to the Crimson Caravan Company near the Strip.

It is possible that if you steal something in the saloon, and then drop it, it will show up as not being owned. [verified] 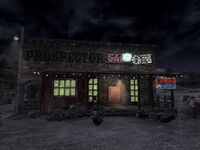 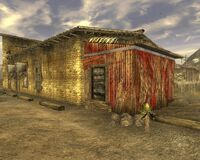 Entrance to the distillery 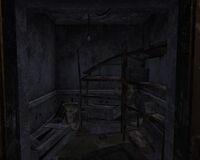 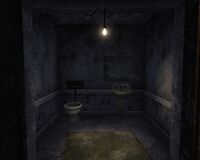 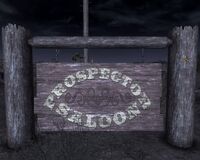