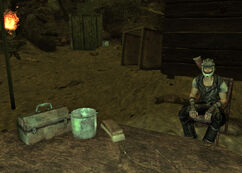 Prospector in the Coyote Mines

“"Prospector" is a polite word for "scavenger". Prospectors can be found all over the Mojave Wasteland, usually looking for the rare unopened safe at the bottom of an irradiated mineshaft.”— Fallout: New Vegas loading screen

Prospectors are scavengers in the Mojave Wasteland in 2281.

Prospectors specialize in searching for old pre-War technology and weapons to sell or use. They are not hostile towards the Courier unless they are provoked, and can be killed without gaining negative Karma. Their equipment is widely varied; they can be found wearing anything from wasteland outfits to a full suit of metal armor, and wielding anything from a 9mm pistol to a 10mm submachine gun.

Retrieved from "https://fallout.fandom.com/wiki/Prospector_(Fallout:_New_Vegas)?oldid=3232055"
Community content is available under CC-BY-SA unless otherwise noted.