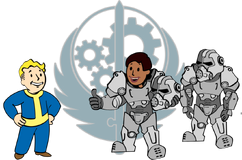 “It's time for the Brotherhood to show the Raiders what belongs to whom.”

Property Rights is a main quest in the Fallout 76 update Steel Dawn.

The Expeditionary Force has not been in Appalachia for long, and already the idea of containment has failed. Raider ambushes and theft have resulted in Brotherhood Hellstorm missile launchers falling into the hands of Crater warbands. Although Paladin Rahmani would like to find a way to coexist, Knight Shin decides to head recovery efforts - and retake the Brotherhood's property by any means necessary.

The quest begins immediately after reporting back from The Retreat. Knight Shin will explain that he will gather a squad to recover the stolen weapons and his philosophy: Hit the raiders hard, secure the weapons, and interrogate any survivors to prevent them from seeing the Brotherhood as easy prey. The player can ask for a refresher, especially the kind of weapons they're supposed to secure, and Shin will be somewhat annoyed by what he sees as negligence (although explain that he won't put that on the Scrolls, since he has no time).

After receiving the briefing, the player has to make their way to the makeshift vault, located due east of Cobbleton farm. After entering it, the Brotherhood supply crates are found immediately in the entryway. Entering the main chamber will trigger conversation with Pierce, who will mock the Brotherhood right into the face of Knight Shin. The knight will make a half-hearted attempt at intimidation, evidently looking forward to a shoot-out with the raiders.

Pierce will instead turn to the "forward scout" and engage in conversation. The player can elect to use Perception 8+ or Charisma 8+ to talk him down, (either by pointing out his hopeless position or appealing to his sense of self-preservation), however if the player has already completed the vault 79 raid and sided with the raiders then they can choose to tell Pierce about how they helped during the raid. But if the player chose to take all of the gold bullion for themselves at the end of the vault 79 raid, Pierce will tell you that you screwed them over then and are screwing them over now. Shin will generally appreciate not compromising or negotiating with the raiders and wiping them out, but will balk at negotiating with them. The fight itself is relatively easy, as Shin comes with a near full set of T-51 power armor, and Pierce will be wounded, but not dead at the end.

Shin will order for Pierce to be let go, once he realizes that Pierce - surrendered or not - will not reveal where the weapons came from, unless he's allowed to return to Crater. After the raider leaves, Shin will issue new orders to follow through on the meeting (and chastise the player character for not revealing their association with Crater, if Wastelanders was completed on the raider side). Pierce will be found at the Crater war room hidden in a broken-off piece of the station due north of the main encampment, with Sheena and Burke.

Pierce will refuse to negotiate if the raiders were attacked, rather than just let go. In that case, Sheena will make the offer in his stead. Either way, they offer to trade intel for intel: Use a holotape with malware that will download Brotherhood roster, patrol data, and other vital information for use by the raiders to set up ambushes or evade patrols, and gain information on the weapons' origin in return. The player is free to refuse.

Otherwise, the new goal is to load the holotape onto Valdez' terminal at Fort Atlas. The player can talk to Scribe Valdez about the situation and she'll propose loading it up with fake data she created in case someone unauthorized accessed her files. When loading Sheena's holotape onto her terminal, it will display the option to download either the real or dummy files.

Either way, the final step is to just head on over to the war room and hand the holotape over. She will reveal that the weapons don't have a single source: Some came from Settlers the raiders killed, another from a group of fellow bandits, who came from the west, at least as far as Ohio. They claimed that they "acquired" them from a group of people in power armor, but didn't say they were Brotherhood (though they did pass around a helmet with a bullet through the visor as a trophy).

Knight Shin is the final stop. He will commend a thorough investigation - learning that the weapons have multiple sources, whether the raiders were passing through Crater or a permanent warband there, and of course, learning that the Foundation is also in possession of these weapons. He can be asked about the Knight's helmet. This will disturb Shin: He will reveal that the expedition lost two members on the way: Knight Thornberry, who returned to Lost Hills, and Knight Connors, who was killed in action. The idea of the raiders retaining his helmet as a throphy disturbs him. He will not reveal either how he died or where the Brotherhood lost the Hellstorms in the first place.

He will refer the player to Paladin Rahmani for instructions on how to contact and negotiate with Foundation. The quest concludes at this point.

Retrieved from "https://fallout.fandom.com/wiki/Property_Rights?oldid=3491189"
Community content is available under CC-BY-SA unless otherwise noted.