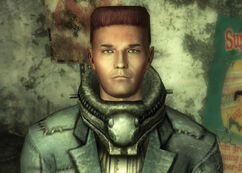 Pronto is a slaver who works in Paradise Falls at the store Lock and Load in 2277.

Pronto is one of those guys who has always been around, but one cannot remember how they met him or when he showed up. Rumor has it that he is the son of an old slaver, but he does not get a lot of respect from them. He is a nice guy, and nice guys do not do well in Paradise Falls. Pronto has run Lock and Load since the last owner met an untimely end. According to Forty (then called Thirty-Two), the previous owner died when a weapon accidentally went off in his shop. If anyone knows differently, they are not saying anything.[1]

Pronto's inventory is extremely limited and he is always in need of parts. According to him, this is because his only suppliers are his fellow slavers and they keep all of the "good stuff" for themselves.

Economics of Violence: One can expand Pronto's shop by giving him 20 Chinese assault rifles. In addition, he will get a few more caps (around 400 instead of 150) and grant the player character a 20% discount.

Pronto appears only in Fallout 3.

Retrieved from "https://fallout.fandom.com/wiki/Pronto?oldid=3259791"
Community content is available under CC-BY-SA unless otherwise noted.