Project X-13 is a side quest in the Fallout: New Vegas add-on Old World Blues.

This quest activates after acquiring the stealth suit Mk II during the quest X-13: Attack of the Infiltrator!. Completion of the basic infiltration test is a shared objective of both quests. Project X-13 gives the player character the option to further upgrade the suit after initialization.

After assembling the stealth suit Mk II during X-13: Attack of the Infiltrator! and entering the stealth testing lab, activate the test terminal to start the basic infiltration test. The Courier can freely explore the entire area prior to activating the actual test. If the Courier makes preparations by sweeping the area ahead of time, a search of the walls and desks will reveal many (currently inert) laser tripwire emitters which activate later in the optional tests. With a Science or Repair skill of 50, these can be permanently disabled or hacked (from a red laser beam to a blue, reading the player as friendly; no alarms will trigger when the blue beams are crossed). The currently friendly robots can also be destroyed ahead of time, which will not re-spawn until the final test.

Basic test: The test is initiated via a terminal on the bottom floor, next to a wall safe. Once the test is started, the player character must make their way through the area, avoiding any patrolling robobrains. If the player character is detected, the test will reset, and they must return to the test terminal to start again. Find the administrator's office and retrieve the X-13 document from the wall safe. Doing so will complete the basic infiltration test and shut down all security measures. A reward will appear in the safe next to the test terminal. There are several routes through the area on the lower floor to reach the safe. Alternatively, the test can be started, followed by a right turn from the test terminal, and a move upstairs to the observation level. Move to the area above the administrator's office and simply jump down to reach the safe next to the administrator's desk, thereby avoiding the security. The reward for doing this stage in Project X-13 redux are 10 energy cells.

Once the basic infiltration test is complete, the stealth suit Mk II will be upgraded (Sneak bonus increased by +10, to 25). Once complete, enemy robo-scorpions will appear throughout the X-13 facility under the direction of Dr. Mobius. Once the player has eliminated the newly spawned robo-scorpions, the next stealth test can optionally be run to further upgrade the stealth suit Mk II. The goal objective for the Advanced and Expert levels remains the same X-13 document located in the administrator's safe, and the player must deactivate the robobrains during the final robot compliance test. Security measures are increased with each test level.

Advanced test: Go back to the test terminal and start the advanced test. The Courier must again evade the robobrains (if not previously destroyed), but now also avoid the activated laser tripwires (if they were not disabled or hacked earlier). Completing the Advanced test will add a +1 Perception bonus to the suit's effects. Also, a new reward will appear in the safe next to the test terminal. The reward for doing this stage in Project X-13 redux are 10 microfusion cells.

Expert test: Go back to the test terminal and start the expert test. The security now consists of robobrains, laser tripwires, and additional proximity detectors that function similar to land mines albeit without the explosion. Unlike the first two hazards, the proximity detectors will not spawn until the player has started the expert test at least once, and will rearm themselves every time the Courier starts it regardless of whether or not they were disabled previously. However, no skill is required to deactivate them; simply walk up to them and use action button then choose "deactivate" and shut them off. The detectors have the appearance of pulse mines, but with rounded edges instead of jagged, and are usually placed on a table, desk, or floor to keep them out of sight. Completing the Expert test will add a +1 Agility bonus to the suit's effects. Again, a reward will appear in the safe next to the test terminal. The reward for doing this stage in Project X-13 redux is a copy of ¡La Fantoma! .

Robot compliance test: Go back to the test terminal a final time to start the robot compliance test. The security is the same as the expert test, but this time the robobrains along with the proximity detectors have respawned. This time the robots must be deactivated rather than simply avoided. If they were previously destroyed, they will respawn for this test. Sneak up behind each robot and use the option given to deactivate it. Once all robots are disabled the test immediately ends. Completing the robot compliance test increases the player's crouched movement speed by 20% when wearing the suit. A Chinese Army: Special Ops Training Manual will appear in the safe next to the test terminal as a final reward for completing all the challenges. The reward for doing this stage in Project X-13 redux is one Stealth Boy. 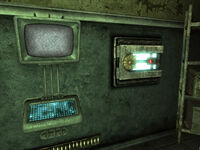 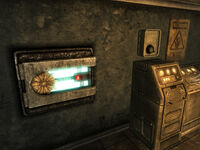 Try reaching this wall safe without being detected. 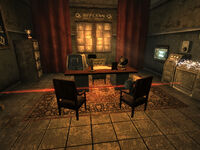 A red tripwire during the advanced test 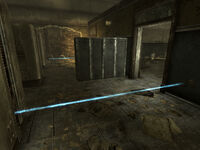 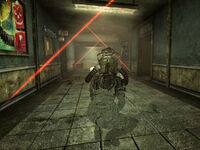 Use a Stealth Boy to deactivate the robobrain during the robot compliance test. 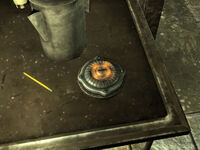