Humans were to be a race within Interplay's and Black Isle Studios's original Project V13, also known as Fallout Online. Humans are the projenitor race for ghouls and super mutants, as well as the most populus race in the series.

Super mutants were supposed to be included in Interplay's Fallout MMO, Fallout Online (also referred to as the original Project V13).

From a screenshot one could see what seems like a peaceful super mutant. In the short story On the Beach, published in The Armageddon Rag, Vol. 3, the Brotherhood of Steel, working alongside the Guardian Brotherhood, were fighting against seemingly hostile super mutants that had obtained and utilized power armor. 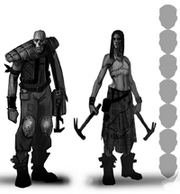 Ghouls were the first announced race for Interplay's first Project V13 in The Armageddon Rag, Vol. 3.

Their presence was confirmed within proceedings during the Bethesda v. Interplay court case.

The existence of this class was confirmed within proceedings of the Bethesda v. Interplay court case.

Retrieved from "https://fallout.fandom.com/wiki/Project_V13_races?oldid=3360880"
Community content is available under CC-BY-SA unless otherwise noted.