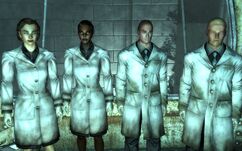 Project Purity scientists are scientists hired by the Brotherhood of Steel battalion stationed at the Jefferson Memorial to maintain Project Purity following the departure of Dr. Madison Li in 2277.

Following the departure of Dr. Madison Li and the deaths of most of the original Project Purity staff, the Brotherhood of Steel contingent deployed to the recently-liberated water purifier, lead by Scribe Bigsley contracted with local scientific experts from the lab at Rivet City to assist with running and maintaining the now-operational Project Purity installation. The scientists are very busy personnel and are gruff with their employers back at the Citadel.

The scientists work in the rotunda, and are not very welcoming to the person who gave them all that work, similar to Scribe Bigsley.

Project Purity scientists do not become hostile towards the Lone Wanderer if he/she decides to attack one of them; instead, they flee.

Retrieved from "https://fallout.fandom.com/wiki/Project_Purity_scientist?oldid=3081438"
Community content is available under CC-BY-SA unless otherwise noted.