“Revelation 21:6. I am Alpha and Omega, the beginning and end. I shall give unto him who is athirst the fountain of the waters of life freely.”— James, reciting the quote that was effectively the inspiration, motto and password for the whole entire project.

Project Purity is a water purification project in the Capital Wasteland in 2277 and 2278.

Project Purity was created prior to the beginning of the Fallout 3 storyline. It was the ambition and dream of both the Lone Wanderer's parents, Catherine and James, and other scientists, including Madison Li. The project's goal was to turn the polluted and irradiated waters of the Potomac River into clean, potable water, thus increasing the quality of life in Capital Wasteland. The technology used was similar to Vault-Tec water filtration systems used in the vaults, but at a much more massive scale.

It was originally supported by the Brotherhood of Steel when they first came to the Capital Wasteland, who would send knights and paladins to defend the project from super mutants and other threats in the ruins. Although the support eroded over time due to the project's lack of results and need for Brotherhood troops elsewhere, e.g. guarding the Citadel or purging the super mutants from the D.C. ruins. Later, more soldiers would be taken from the project in an attempt to make up for soldiers lost to the Brotherhood Outcasts.

This support ended indefinitely after the newborn Lone Wanderer's father James left, thus ending almost all promising research and possibility of future success. After James' abandonment and no support from the Brotherhood, the other scientists abandoned the project, Doctor Li and presumably what was left of the team left to the nearby Rivet City. In Rivet City, Doctor Li will tell the Lone Wanderer that James left Vault 101 to seek her out and restart Project Purity. Doctor Li refused and James moved on. Project Purity is what motivated him to eventually leave the Vault in search of a G.E.C.K. in the hope of completing the project.

After finding James, it is revealed Project Purity was briefly rekindled at the Jefferson Memorial, but the location was captured by Vault 87 super mutants. After enlisting the assistance of Doctor Li and her staff from Rivet City, the location is cleared before the project finally resumes progress. However, the Enclave seizes the Jefferson Memorial and Colonel Autumn attempts to persuade James to cede control to them. James refuses, and kills both himself and the Enclave soldiers with lethal doses of radiation, although Autumn survives. The player is forced to escort the remaining staff to the relative safety of the Citadel, contending with feral ghouls and even more Enclave soldiers.

Though the Enclave managed to capture the Jefferson Memorial, a crucial component, the G.E.C.K., is still required to bring the project to fruition. Once the Lone Wanderer does obtain the G.E.C.K., they are incapacitated by the Enclave and taken to Raven Rock. President John Henry Eden asks that the Lone Wanderer install the modified FEV when they reach the Project Purity control room, which will purge the Capital Wasteland of any beings "tainted" with radiation, regardless of severity.

After the decision is made, the water of the Capital Wasteland is purified at last, and life begins anew in the Capital Wasteland. The Lone Wanderer can also, if he/she chooses, simply not do anything, allowing the purifier to self destruct, thus sacrificing the lives of everyone in the facility for no reason. The ending that follows is shorter than the normal ending.

In Broken Steel the purifier is activated, and the Brotherhood of Steel (along with the security team from Rivet City) begins distributing Aqua Pura (purified water) to the various regions of the Capital Wasteland. In addition, the small body of water directly in front of the Jefferson Memorial (the area before the bridge) known as the Tidal Basin is free of radiation.

Any water beyond the bridge is still irradiated as Project Purity will take some time to purify all the water in the Potomac River. If the Modified FEV was inserted into the purifier, then the Aqua Pura will be infected with it.

The project is tied to Following in His Footsteps, The Waters of Life, Holy Water, Protecting the Water Way and The Amazing Aqua Cura!, as well as the Jefferson Memorial location.

Project Purity appears in Fallout 3, Broken Steel, and is briefly mentioned by Deacon in Fallout 4 as well as a raider in Fallout Shelter during the quest Game Show Gauntlet. 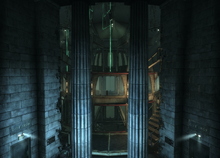 The Rotunda
Add an image to this gallery
Retrieved from "https://fallout.fandom.com/wiki/Project_Purity?oldid=3121815"
Community content is available under CC-BY-SA unless otherwise noted.